Along with the summer heat, the temperature and rhetoric on asylum seekers continues to rise. There was the altercation between Ontario Premier Ford’s new government and the Trudeau Liberals as to who should bear the cost of services provided to asylum seekers. Due to this spat, Ottawa chose an unusual path by dealing directly with the City of Toronto as it copes with shelter and housing issues. There’s a new minister, Bill Blair, who is now responsible for the border. And there was an emergency committee meeting in the house that was more about political theatre than looking for solutions. 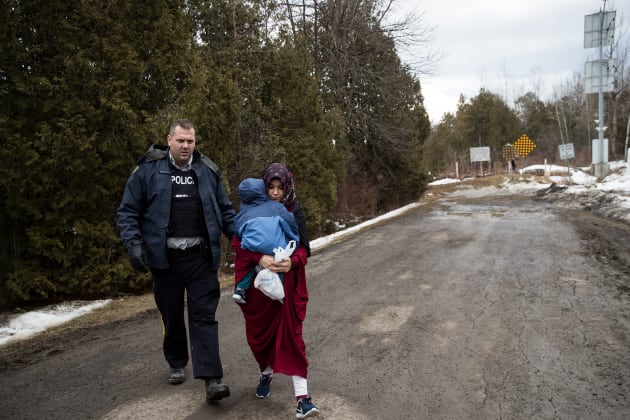 
A mother and child from Turkey are escorted by RCMP after they crossed the U.S.-Canada border into Canada, Feb. 23, 2017.

Where will all this lead? Is this just politics? The heat of summer? Are we really facing a crisis or is this just a challenge? Should we call the asylum seekers from the U.S. “irregular” or “illegal?” Is one view more Canadian than the other?

Important as these questions may be to some, the more important question really is — what can Canada do?

In the short term, Canada must ensure that Canadians have public confidence in the system. Regardless of the numbers of asylum seekers crossing into Canada, it is essential to demonstrate that our systems work, in ordinary and in extraordinary times.

To do so, we must follow our laws and those international conventions that we are party to. We must demonstrate through actions and not just words that “peace, order and good governance” prevail and they do so in a timely manner.

Canada must take a long hard look at itself in the policy mirror.

This can only be accomplished by a renewal at the Immigration and Refugee Board (IRB), the institution that is charged with determining the eligibility of claims. The IRB must be properly resourced to hear claims; this means that is must be able to hire and train more judges, and quickly. A recent report tabled by former Deputy Minister of Citizenship and Immigration Canada Neil Yates outlines some 65 solutions, some big picture and others incremental. The government must very quickly make decisions on which recommendations it will adopt. Immigration, border services and RCMP must also be resourced up (temporarily, if need be) so that the front end of the process works smoothly without long delays.

In tandem, we must continue our efforts to provide correct information on our asylum processes — whether in the U.S. or to source countries like Nigeria. The rhetoric notwithstanding, the numbers of asylum seekers entering Canada is in decline since the beginning of the year, and it is possible that these efforts are paying off.

In the medium term, Canada must take a long hard look at itself in the policy mirror. Our immigration policies reflect a bias towards the highly skilled. However, an economy needs all kinds of workers, especially in a country like ours where jobs in many parts of Canada are going unfilled because there is no interest or sustained interest in them. It is time for us to consider a new immigration stream which would provide a valve for those who may not be refugees, but who are escaping crushing poverty in their own countries and whose labour is badly needed in our economy.

Another medium-term solution is to consider immigration through the lens of “triple win,” a situation where all players — including sending countries, receiving countries and the immigrant — all come out winners. Currently, this is not the case.

The biggest losers may well be source countries who complain of “brain drain” — losing skilled educated workers to other countries. It is possible to reverse this trend by investing in educational systems and institutions in traditional source countries so that individuals are trained to the standards expected in destination countries. This raises the human capital in source countries, makes it easier for those who choose to immigrate to integrate quickly into the labour market without the usual barriers to accreditation. But it also leaves an educational and human capital legacy in sending countries.

In the long term, Canada and other countries should recognize that migration is a global phenomenon. The best way to prevent irregular migration is to make source countries safe and prosperous for themselves and for the world.

This means making investments in infrastructure, in local industries and education that go well beyond the traditional definition of aid so that there is a steady march from poverty and oppression to opportunity and justice. This must be coupled with a rethink of the global supply chain which rewards products produced at the cheapest price — usually in a country where workers are oppressed, resulting in their search for a different life — and possibly their decision to join the line-up of asylum seekers. This is the best way of keeping our borders safe.

Hi friends, This video is specially for those persons who want to know about the CANADA EXPRESS ENTRY POINTS SYSTEM. If you want to know more then … source YouTube Related Posts:Guidance relating to the […]

Did we win? Canadians who served in Afghanistan reflect on the prospects for peace

[ad_1] Bickering and divided, Afghan leaders are expected to stumble toward the peace table with the Taliban at some point soon. It’s an event that likely won’t register on officials’ radar in Ottawa — where COVID-19 and […]

Looking to Sponsor Your Parents or Grandparents for Canadian Immigration?

[ad_1] The Parent and Grandparent Sponsorship (PGP) program is one of Canada’s most popular immigration programs. Last year, the program operated on a first-come, first-serve basis and hit its program limit of 20,000 applicants in […]