A new poll of U.S. attitudes show that Americans want less ‘America first’ and a lot more Canada. A third of them would even prefer to live here.

If you ask enough Americans, it really sounds like they think Canada is a better place to live.

It’s perhaps not surprising then that the vast majority of Americans—89 per cent across all political stripes—also believe that the U.S. should trade more with Canada.

But while Americans are going one way, Donald Trump is going the other. This week the Trump Administration is reportedly looking at slapping Canada with a 10 per cent aluminum tariff before July 1, according to a recent Bloomberg report. Trump’s latest crackdown on work visas also appears to be at odds with American attitudes—85 per cent of Americans (and 83 per cent of Republican voters) say it should be easier for Canadians and Americans to work in either country (putting aside measures to control the pandemic).

READ MORE: What Americans don’t know… should worry us

While Trump might claim his actions are about putting “America First,”  a surprising number of Americans are now thinking “Canada first.” Given the hypothetical of having friends, family and work opportunities being in either Canada or the U.S., 36 per cent of Americans would rather live north of the border (that’s over 100 million of them)—including the majority of younger generations, those aged 18-30. 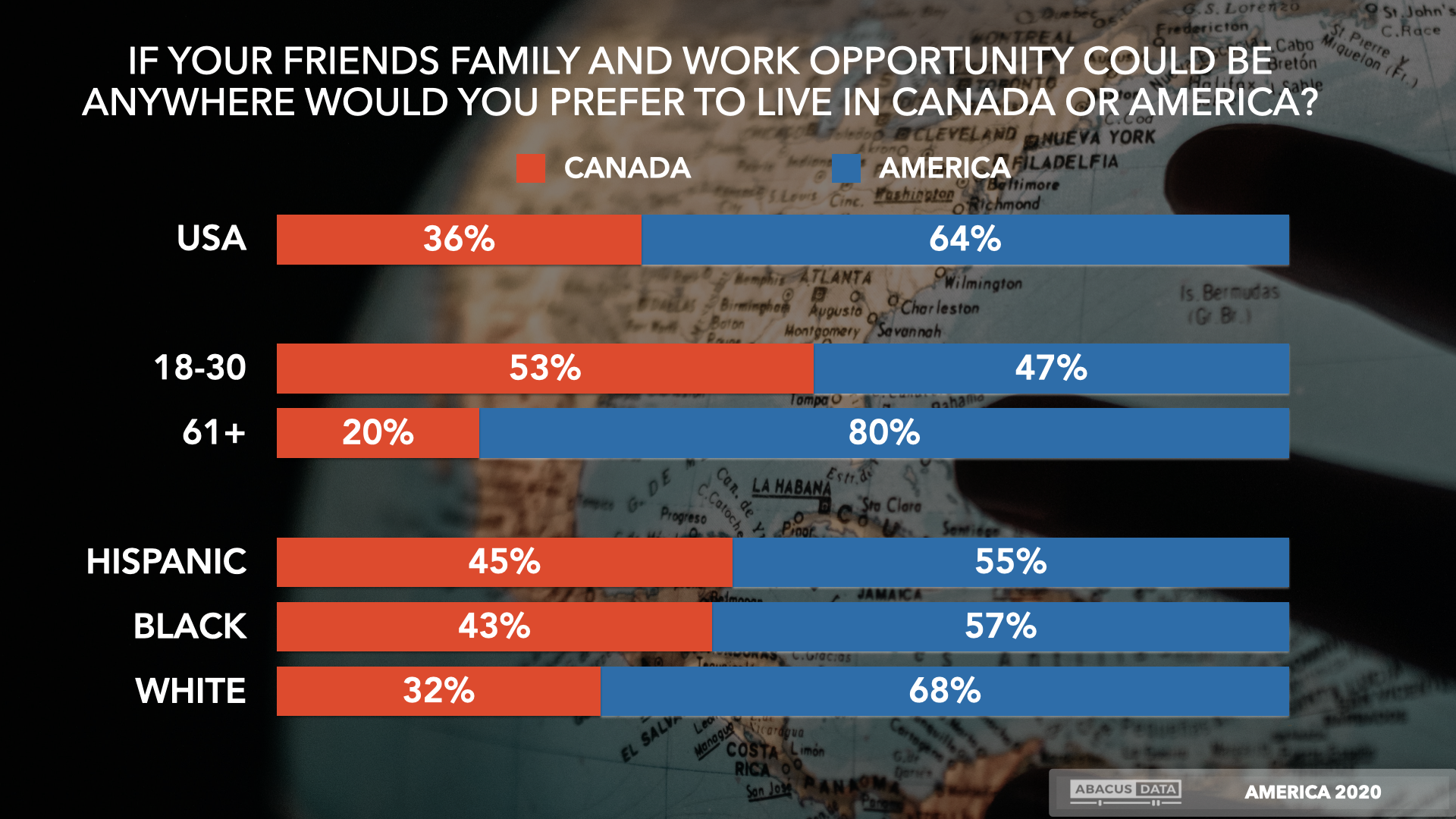 “Americans don’t know much about Canada, for the most part, and there’s no shortage of people chanting ‘USA! USA!’ all the time,” says Bruce Anderson, chairman of Abacus Data and co-author of the report, provided exclusively to Maclean’s. “When half of Democrats would prefer to live in Canada than America, that strikes me as a high number of people saying, ‘This isn’t the best place for me to live.’ ”

Not that any Americans can come to Canada any time soon—not with the border closed for the foreseeable future, as states like Florida, Arizona, Alabama, Texas and South Carolina all see their coronavirus cases on the rise. Meanwhile, the White House appears to have all but given up on social distancing or mask wearing recommendations—with the re-start of Trump hosting indoor rallies.

And while most Americans would like governments to make cross-border work easier, only half of them say that it’s time to re-0pen the border, given the pandemic. Seventy-eight per cent of  Americans—including 66 per cent of Republicans—think America is a bigger risk to Canada when it comes to transmission of the virus. 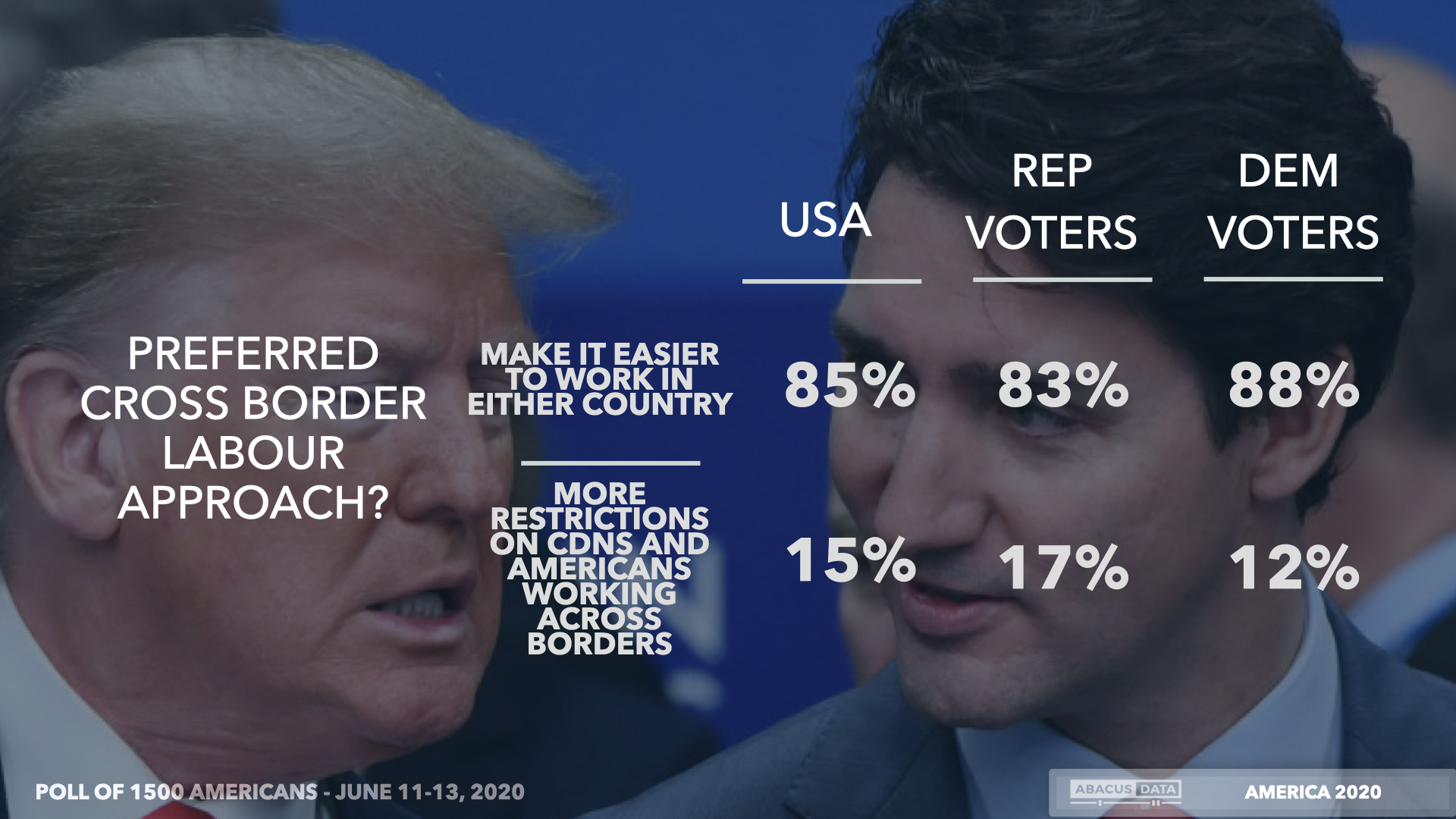 “You have a lot of people saying in an ideal world, we’d have easier movement of workers across the border, but we’re not sure we should do that yet,” Anderson adds. “And it’s mostly because they think America is a threat to Canada, rather than the reverse.”

The survey results highlight America’s clear political partisan divide. The majority of remaining core Republicans—or Trump Republicans—think everything is fine at the moment: gun laws are good; immigration policy is good; coronavirus response is good; the United States is still leader of the free world and America’s relationship with other countries around the world have, if anything, improved. Worryingly, only 40-some per cent see Canada as America’s best friend in the world (just ahead of Great Britain).

Behind the largely favourable views of trade and their northern neighbour, there are some other troubling attitudes. One out of every five Americans supports building a wall between the Canada and the U.S., while another 27 per cent would support U.S. troops being positioned along the border. Forty per cent of those surveyed say America should leave NORAD, the mutually beneficial post-war defence agreement.

But maybe its Canadians who should be concerned about defence ties to America: a shocking 23 per cent of Trump voters think the U.S. should invade Canada to take advantage of our resources.

Spread the love SIGN UP FOR A FREE WEBINAR HOW TO GET E2 VISA: CONSULT WITH ME … source YouTube Related Posts:Random Happenings in New York City This WeekHow To Immigrate To The U.S. By […]

Spread the love There are various reasons why people choose to migrate to Australia from Singapore or Malaysia or anywhere in the region, but what does an Australian … source YouTube Related Posts:Singapore morning news […]

Spread the love BEIJING (AP) — China on Thursday demanded Canada release a Huawei Technologies executive who was arrested in a case that adds to technology tensions with Washington and threatens to complicate trade talks. […]