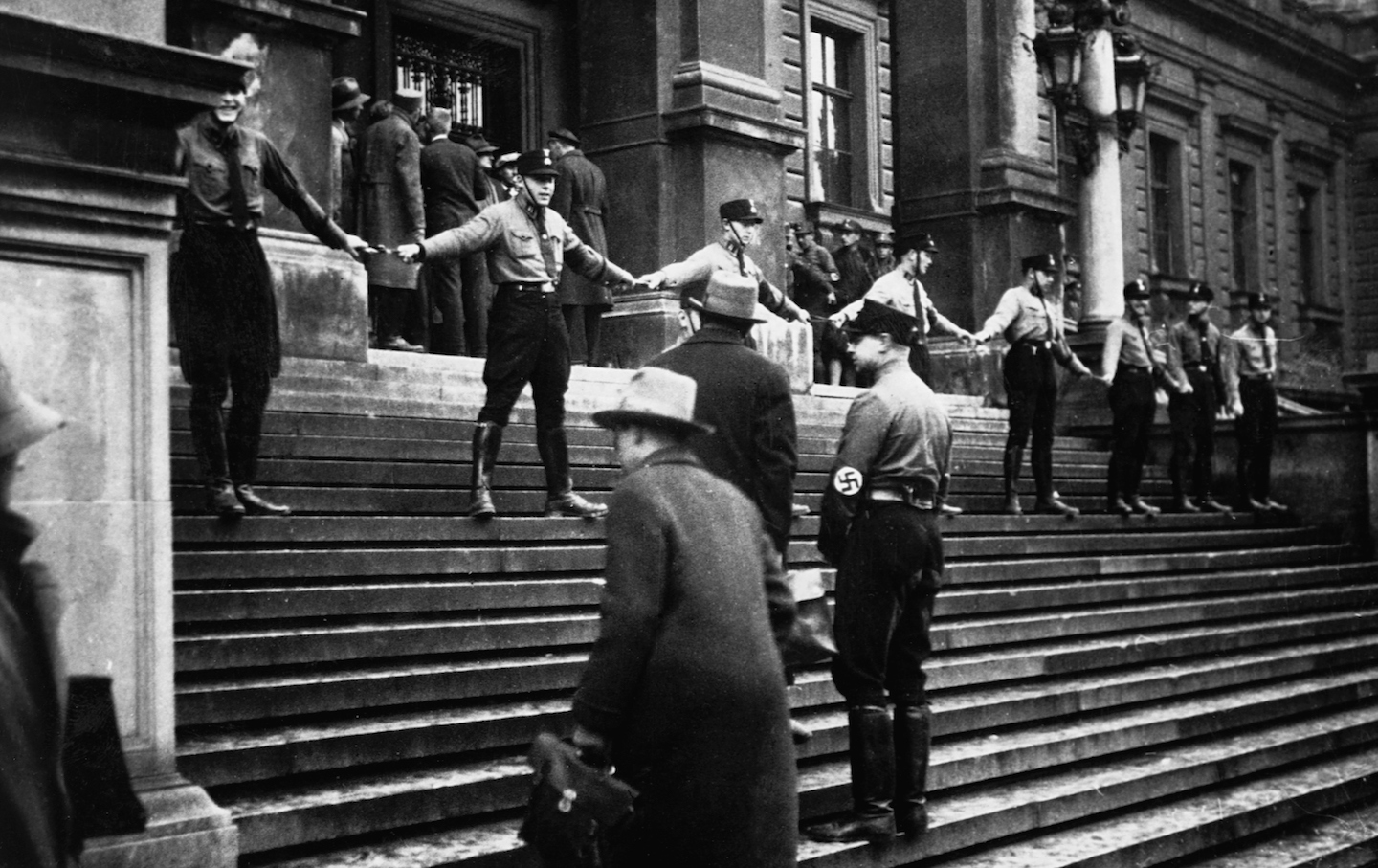 Nazis blocking the entrance of a local university in Vienna.

In 1940, Princeton professor Rudolf Ladenburg received an urgent telegram: His student Hedwig Kohn, a Jewish physicist formerly at the University of Breslau (today, Wrocław, Poland), was in grave danger. She had managed to flee to Sweden but had no exit visa and would soon be forced to return home, where she faced almost certain death. Her best means of escape was to obtain a visiting professorship in the United States. If an American institution agreed to employ her, Kohn would qualify for a special visa granting her legal passage out of Sweden. Kohn’s friends implored Ladenburg to do all that he could to secure her a teaching post.

Soon after receiving the telegram, Ladenburg sprang into action: He contacted Esther Caukin Brunauer of the American Association of University Women, who dispatched a flurry of letters to the presidents of Sweet Briar, Vassar, Goucher, Wellesley, Sarah Lawrence, Connecticut College, and the New Jersey College for Women. Would any of them agree to hire Kohn? she asked. Would any of them save her life? Brunauer urged the presidents to reply immediately: “The time is very short.”

By 1940, the leaders of American universities and colleges would have become inured to such dire pleas. The 1924 Immigration Restriction Act had made it possible for foreign professors with proof of an American job offer eligible to receive a rare “non-quota” visa, which was not subject to the United States’ strict country-by-country immigration limits. This provision gave the American academy an outsize power to save Jewish refugees, and during the 1930s and ’40s, thousands of Jewish scholars in Nazi-occupied Europe begged their American colleagues for positions as a golden ticket to freedom.

In principle, there was no cap on how many “non-quota” visas could be granted per year. In practice, however, there could be a hard cap on American empathy, as recounted in Laurel Leff’s Well Worth Saving: American Universities’ Life-and-Death Decisions on Refugees From Nazi Europe. As this brisk and chilling account of the American academy’s response to the Holocaust reveals, from 1933 to 1941 (the year most emigration from Europe ended), a startingly low number of professors received “non-quota” visas: Only 944, or fewer than 150 per year, not counting those given to their children and spouses. For every academic like Ladenburg or Brunauer seeking to help Jewish refugee scholars, Leff shows that there were thousands more professors and administrators unmoved by their suffering. In telling the forgotten story of their inaction in the face of Nazism, Well Worth Saving issues a stark reminder of just how deeply rooted intolerance and xenophobia are in American society, lurking in even its most supposedly enlightened corners.

If you, like me, believed that Jewish scholars were largely embraced by the American academy during the 1930s and ’40s, that is because you, like me, are familiar with the people whose biographies buoy this triumphant narrative—people like Hannah Arendt, Albert Einstein, and Herbert Marcuse. All arrived in the United States during this period; all were accepted here and went on to leave indelible marks upon their fields.

According to Leff, a professor of journalism and associate director of Northwestern University’s Jewish Studies Program, it is our preoccupation with such figures that is to blame for our skewed picture of this history. For reasons of patriotism, the historical literature on this period in US history has “tended to concentrate on famous, or at least successful, refugees and fixate on what the United States gained and Germany lost in pushing them into exile.” These stories paint a flattering picture of the United States as a beacon of intellectual tolerance, and they have the added bonus of being simpler to tell. “Those who succeeded can be identified relatively easily, and their accomplishments can be summarized, synthesized, and analyzed,” Leff writes. “Not so for the many more whose lives flowed in disparate and often invisible directions.”

When we focus on the extraordinary, we are apt to forget that they are just that: exceptions to ordinary experience. It is true that a group of European Jewish thinkers were accepted into the American academy during World War II, that many of them became assimilated, and that some even found celebrity. Equally true, however, is that the majority of Jewish professors seeking asylum in the United States were denied entry. If we step away from the Arendts, the Einsteins, and the Marcuses, as Well Worth Saving does, a different and darker picture of our past begins to emerge—one that punctures the pervasive “myth,” as Leff calls it, “of a welcoming American academy.”

To do so, the book “shifts the focus from those who arrived in the United States to those who did not,” recounting the story of Jewish intellectual migration from the perspective of those who struggled or failed to emigrate. A history-slash-multiple-biography, Well Worth Saving follows the lives of eight academics still stuck in Europe at the end of the 1930s: besides Kohn, zoologist Leonore Brecher, jurist Max Fleischmann, Russianist Michael Gorlin, historian Hedwig Hintze, musicologist Mieczyslaw Kolinski, physicist Marie Anna Schirmann, and historian Käthe Spiegel. All were dismissed from European universities for being Jewish or “non-Aryan” and urgently sought to come to the United States. As the book unfolds, we learn what became of them, and in the process we see just how hostile the academy was to Jewish refugees.

That Leff’s protagonists are likely unknown to readers is deliberate. She has chosen them because, though bright and interesting, they were not academic superstars whom the United States was eager to claim for its own. Each fought tooth and nail to obtain a visa, but only one managed to get both a teaching offer and a “non-quota” visa. The rest were forced to fend for themselves.

What happened to them is unraveled incrementally, a new piece of their sagas woven into chapters that describe the decision-making process at universities, the State Department, and organizations like the Rockefeller Foundation, a key mediator between refugee scholars and American institutions. Leff also includes anecdotes drawn from the lives of other refugee scholars to help flesh out general trends in hiring and visa-issuing protocols.

The resulting picture is a bleak one. The universities and the State Department were filled with obstructionists who blocked Jewish emigration at every turn. Some were anti-Semites, convinced that Jewish faculty would taint America’s ivory towers. (One example is Harvard president James Conant, who once opined that “a deluge of medium and good men of the Jewish race in scientific positions…would do a lot of harm.”) Others were red-scaremongers, afraid that Jews might bolshevize impressionable undergraduates, and still others were nationalists, unwilling to hand coveted academic appointments over to foreigners.

There was no shortage of excuses to veto the hiring of Jewish refugees, and one of the book’s major contributions is to prove how incredibly rare it was for anyone to make the cut. Only candidates who fit a very specific profile were likely to be deemed “worth saving,” a phrase lifted from contemporaneous recommendation letters and case files. Leff combed through many such documents to draw a damning conclusion: To have any real shot at emigration, “scholars needed to be world-class and well connected,” not “too old or too young, too right or too left, or, most important, too Jewish. Having money helped; being a woman did not.”

The fastest track to a job offer was preeminence—even the most unsympathetic characters, like Conant, were willing to consider elite scholars—and here men had a decided advantage over women. They generally were given better teaching and research opportunities and thus were better qualified on paper. Brecher and Schirmann, for example, occupied junior positions because they had been denied the German credential necessary for tenure on the basis of their sex, yet those junior positions counted against them in their emigration appeals. Sexism had chipped away at their livelihoods; later on, it would endanger their lives.

Old age, political radicalism, and Jewishness were also strikes against candidates. The ideal hire was middle-aged—experienced but with a few good decades of work left in them—politically moderate, and most crucially, minimally Jewish. Being a Christian convert, or “Aryan” in appearance, or of only partial Jewish heritage made a job seeker more appealing—and ironically, this preference for partial Jews meant that some of the “Jewish” scholars who made it to the United States were Jewish only according to the “one drop”–adjacent logic of Nazi classification systems.

By contrast, those who were 100 percent Jewish fared poorly, and even great renown was not guaranteed to help them. One of the most disturbing examples is the story of Marc Bloch. In 1940, the president of Dartmouth College, Ernest Hopkins, contacted the Rockefeller Foundation in search of an economic historian. He was open to hiring a refugee, so long as the person was not “obviously Jewish.” This meant that Bloch, a French historian and a founder of the Annales school, was immediately disqualified. Though he was “a scholar of first rank,” the foundation noted that he was “more obviously Jewish” and “definitely labeled Jewish in France.” Bloch would subsequently join the French Resistance and be executed by a firing squad in 1944.

As we discover in the last chapter of Well Worth Saving, titled “Final Appeals,” the majority of our eight academics did not meet happier ends. Withholding their fates until the conclusion is a structural device that is calculated but effective, adding flair and emotional depth to a book otherwise written in a straightforward tone. The delay allows readers to find out more about Kohn, Brecher, Fleischmann, Gorlin, Hintze, Kolinksi, Schirmann, and Spiegel and to develop a stake in their well-being, thanks to Leff’s stunning archival research.

In the end, Well Worth Saving stands out as a book of exceptional historical thoroughness as well as great humanity, for insisting that all lives deserve to be meticulously chronicled—not just those that achieve public renown. It is too late to do anything for the refugees in Leff’s book deemed not “worth saving,” but we can still remember them and determine them worth remembering.

Spread the love Subscribe to NowThis World: At the House of Parliament in London, a mass “face-sitting” protest is calling attention to … source YouTube Related Posts:UK election: Dossiers of dirt are being unleashed.…White House […]

Why I Left America | Evan Edinger

Spread the love Who’s looking to leave America? Well don’t that’s my thing ay! I moved to the UK 4 years ago and I let you in on some reasons why and how! One of […]