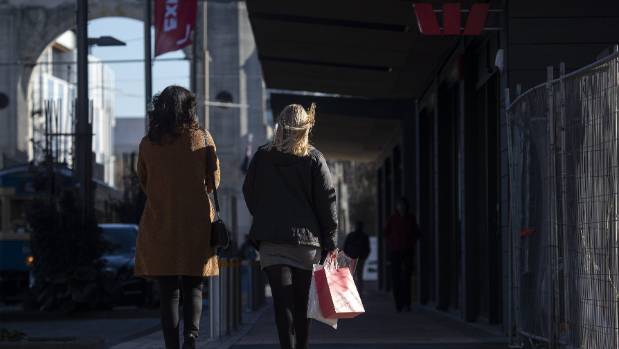 A relatively rare sighting of shoppers in central Christchurch.

Has it been the winter of our discontent? Something like that has hit Christchurch, where inner-city retailers say they have struggled since about Easter. “For lease” signs proliferate and established businesses are falling over. Pedestrian areas seem almost entirely abandoned and the fashion district around the Crossing often looks forlorn. The disappearance of the much-loved Canterbury Cheesemongers has been seen as emblematic of the ongoing difficulties with life in the still patchy, still very empty CBD. “Sometimes we feel like we’re a museum of cheese,” owner Sarah Aspinwall told The Press. Just a stone’s throw away on Montreal St, The Villas restaurant has gone under. Amazingly, it sits almost next door to the very populated Christchurch City Council. Columnist and bar owner Johnny Moore blames the rebuild “roosters” who are “so obsessed with master plans, visions and blueprints that they’ve failed to recognise that those doing business in the current environment want to be a part of the future city, want to be the genesis of the future city”. The moral is: if you like it, you should spend some money in it. One hopes that a bright, hot summer will also change some fortunes.

If the Leader of the Opposition thought he had trouble getting a word in edgeways before, wait until Jacinda Ardern, Clarke Gayford and baby Neve go to the United Nations in September. The Prime Minister’s six weeks of maternity leave came to an end, Acting Prime Minister and uncle of the nation Winston Peters quietly stepped aside and, despite the worst predictions of pundits, the sky did not fall in. Ardern did a full day of media on Thursday and told Stuff journalist Alison Mau about the unfamiliar territory we are all now stepping into. Where is the line between the private and the public? The baby is understandably off limits to press gallery photographers. “We’re both very conscious of her privacy,” Ardern said. “I chose a political life, she didn’t. But at the same time I recognise there’s an interest.” That said, Ardern was pleased about the respect that has been shown so far: “The amount of privacy we’ve been given and she’s been given has warmed my heart. Because there’s every chance that people could have been outside my house or followed us and that hasn’t happened.”

Until this week, few New Zealanders would have heard of Lukas Travnicek​, the new, extravagantly bearded Czech owner of the 40,000-hectare Mt White Station in the South Island. He first turned up in Auckland in the 1990s, working for free in a law firm and as a kitchen hand on weekends, and he met his Thai-born New Zealand wife here. But washing dishes or even working as a lawyer doesn’t buy a high country station and it turns out that Travnicek’s father founded a major European textile company that was sold in 2005. Travnicek and his family have permanent residency and have opted to live in New Plymouth. “I love nature more than money,” he told Newsroom. “It’s my passion.” Which sounds lovely but conservationists say there are still important access issues to resolve as 1000ha of the lease, a section known as Riversdale Flats, should have been added to Arthur’s Pass National Park more than a century ago.

How To Get Permanent Residency In Australia Urdu / Hindi

[ad_1] The relevance of the Hague Children’s Conventions in the African context will be under the spotlight this week and key to discussions will be the Child Abduction Convention and the Inter-country Adoption Convention. International […]

[ad_1] Under current lockdown rules in the UK, holidays are firmly on hold. According to the Government regulations, only those who need to travel for an “essential” purpose are permitted to do so. However, along […]