U.S. President Donald Trump sought to deflect blame for the deaths of two Guatemalan children in U.S. custody by claiming they were “very sick” when they arrived, even though immigration authorities have said both children passed initial health checks.

The mother of the boy who died Christmas Eve told The Associated Press on Saturday that her son was healthy when he left with his father on their journey hoping to migrate to the U.S.

Trump, whose administration has faced widespread criticism over the deaths, pointed on Twitter at Democrats “and their pathetic immigration policies that allow people to make the long trek thinking they can enter our country illegally.”

He also said that both children “were very sick before they were given over to Border Patrol.”

The two tweets were his first comments on the Dec. 8 death of seven-year-old Jakelin Caal and the death on Christmas Eve of eight-year-old Felipe Gomez Alonzo.

Felipe’s mother, Catarina Alonzo, told the AP that her son reported he was doing well every time that he and his father called home during their trek. She spoke with AP journalists at the family’s home in the remote Guatemalan village of Yalambojoch, her stepdaughter Catarina Gomez translating her indigenous language Chuj into Spanish.

“When he called me, he told me he was fine. He told me not to worry because he was fine,” Catarina Alonzo said.

Any deaths of children or others at the Border are strictly the fault of the Democrats and their pathetic immigration policies that allow people to make the long trek thinking they can enter our country illegally. They can’t. If we had a Wall, they wouldn’t even try! The two…..

Any deaths of children or others at the Border are strictly the fault of the Democrats and their pathetic immigration policies that allow people to make the long trek thinking they can enter our country illegally. They can’t. If we had a Wall, they wouldn’t even try! The two…..

The mother said the last time she spoke with Felipe he was in Mexico at the U.S. border and said he was eating chicken. Their village is in Nenton municipality in Huehuetenango province, about 400 kilometres west of Guatemala City.

U.S. Customs and Border Protection has issued detailed statements about both children’s deaths.

An initial screening of Jakelin “revealed no evidence of health issues,” CBP said on Dec. 14. It wasn’t until several hours later that Jakelin’s father, Nery Caal, told agents that she was “sick and vomiting,” CBP said. Attorneys for the Caal family have also denied claims that Nery “hadn’t given her water in days,” as Trump wrote.

And CBP said Tuesday that agents logged 23 welfare checks of Felipe and his father in the first several days the two were was detained. Felipe’s father, Agustin Gomez, told a Guatemalan official that the boy first showed signs of illness Monday morning, the day he died.

Despite Trump’s claim that Democrats were responsible for “pathetic” immigration policies, at least one of the laws his administration has blamed — legislation that prevents the immediate deportation of unaccompanied children from Central American countries — was signed in 2008 by President George W. Bush, a Republican.

Democrats criticized the president’s tweets. “You slander Jakelin’s memory and re-traumatize her family by spreading lies about why she died,” said U.S. Rep. Joaquin Castro of Texas.

The president’s comments came Saturday afternoon, the same day Nielsen was in Yuma, Ariz., to meet with medical staff at the border. Nielsen said in a statement that “the system is clearly overwhelmed and we must work together to address this humanitarian crisis.” She called on Congress to “act with urgency.” 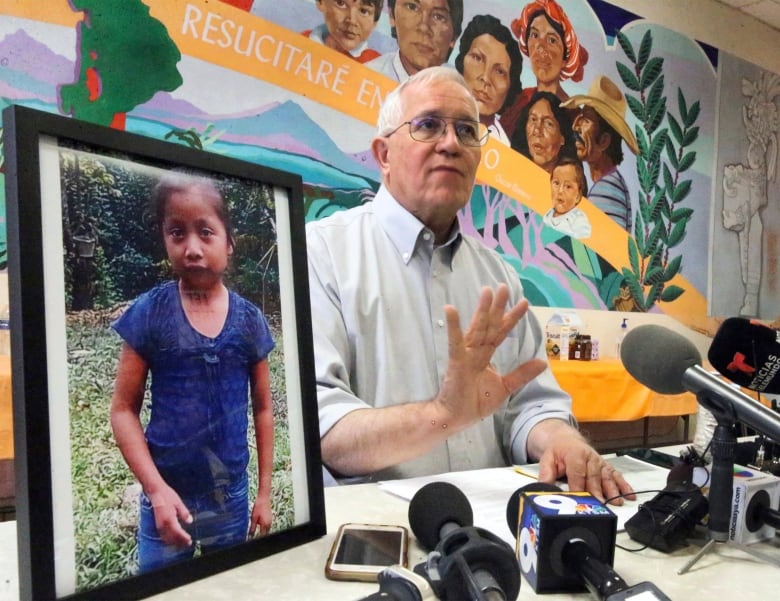 Annunciation House director Ruben Garcia answers questions from the media after reading a statement from the family of Jakelin Caal Maquin, pictured at left, during a press briefing at Casa Vides in downtown El Paso, Texas, on Dec. 15. Jakelin died in the custody of U.S. authorities. (Rudy Gutierrez/The El Paso via Associated Press)

Her office said she was briefed in El Paso, Texas, on Friday on “recently instituted secondary medical screenings and the more thorough initial health screenings of migrants.”

El Paso Mayor Dee Margo said he met with Nielsen and told CNN on Saturday that he agreed with her that the immigration policy is “broken.”

“El Paso is dealing with the symptoms as a result of the lack of fortitude in Washington, on both sides of the aisle, to deal with our immigration policy,” the Republican said.

Felipe and Agustin Gomez were apprehended by border agents Dec. 18 near the Paso del Norte bridge connecting El Paso, Texas, to Juarez, Mexico, according to border officials. The two were detained at the bridge’s processing centre and then the Border Patrol station in El Paso, until being taken at about 1 a.m. Sunday to a facility in Alamogordo, N.M., about 145 kilometres away.

After an agent noticed Felipe coughing, father and son were taken to an Alamogordo hospital, where Felipe was diagnosed with a common cold and found to have a fever of 39.4 C, officials have said.

Felipe was held for observation for 90 minutes, according to CBP, before being released with prescriptions for amoxicillin and ibuprofen.

But the boy fell sick hours later Monday and was re-admitted to the hospital. He died just before midnight. 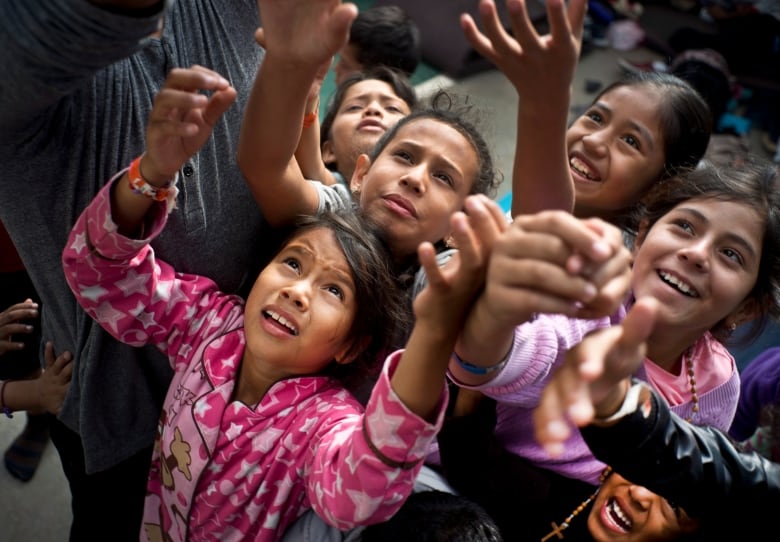 Children who were part of the Central American migrant caravan vie for candy tossed out to them by a social worker at a shelter in Tijuana, Mexico, on Nov. 20. Trump has threatened to cut off U.S. aid to Central American nations.

New Mexico authorities said late Thursday that an autopsy showed Felipe had the flu, but more tests need to be done before a cause of death can be determined.

CBP Commissioner Kevin McAleenan said this week that prior to this month, no child had died in their custody in more than a decade.

Trump threatened via Twitter the previous day to cut off aid to El Salvador, Guatemala and Honduras in Central America’s so-called Northern Triangle region. He has made similar threats in the past without following through.

The government of El Salvador is pushing back against Trump’s assertion it doesn’t do enough to stem migration north to the United States. The Central American nation says it has made strides in economic and social improvements to try to tamp down the root causes of the phenomenon.

A statement released Saturday said that the Salvadoran government has pushed a media campaign urging its citizens not to risk their lives making the dangerous journey, and especially not to expose children. It says migration from the country has fallen significantly this year.

[ad_1] Facing unprecedented lows in immigration, Canada is opening its doors wider to attract and retain skilled individuals and talent from around the world. On the eve of Valentine’s Day, the government announced that it […]

[ad_1] Nicola Sturgeon will today unveil radical plans to introduce a “Scottish visa” in an attempt to boost migration, circumvent the ending of freedom of movement after Brexit, and ramp up demands for immigration policy […]

5 Ways How To Get Your Green Card to the USA