TORONTO — Ask Sherwood “Sherry” Bassin any question about North American amateur hockey and there’s a good chance he’ll know the answer — little surprise given his near half-century in various leagues and positions: team owner, general manager, coach, interim commissioner and elder statesman. In a sport not known for a surfeit of Jews, Bassin, with his open sense of Jewish pride, is an anomaly, especially given the prominent role he’s long played in amateur hockey.

Even growing up in western Canada in the 1940s and early 1950s, hockey and Jewish identity were central facets of Bassin’s life. The two would have an unlikely convergence years later on distant shores.

For all his success in hockey, it was a formerly undisclosed caper Bassin pulled off 36 years ago that earned him a moment of glory in the Jewish world when it was revealed in the media for the first time last winter.

In the fall of 1982, as general manager of Canada’s national junior hockey team, Bassin was preparing for the 1983 World Junior Hockey Championship that was to run in the then-Soviet Union from late December through January.

Knowing the hardship Soviet Jews faced under the Communist regime, Bassin had heard that synagogues there sorely lacked prayer books and ritual shawls. He soon devised a way to help — but he knew it could only work with the cooperation of the team. 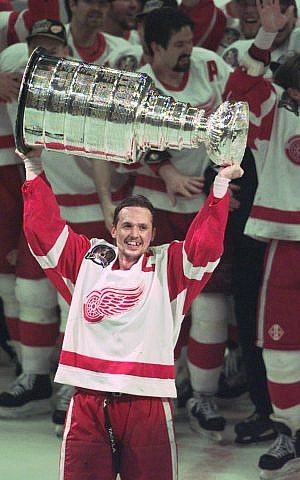 Bassin first broached his idea with the team’s head coach and players, none of whom were Jewish. His roster included future National Hockey League (NHL) superstars Mario Lemieux and Steve Yzerman. He explained to the team the plight of Soviet Jews and the adversity they faced trying to practice their religion due to government restrictions.

Bassin asked if he could enlist them in his plan to smuggle prayer books and shawls into Russia during the tournament in Leningrad (now Saint Petersburg). Once they agreed, he purchased a few dozen siddurim (prayer books) and tallits (shawls) at a Judaica store in Toronto and distributed them to his players with instructions to conceal them in their equipment bags among their skates, helmets, jock straps, elbow, shoulder and shin pads, and other hockey paraphernalia.

“Everyone on the team understood the difficult situation for Soviet Jews after I explained it to them,” Bassin tells The Times of Israel during an interview at a Toronto coffee shop. “They agreed to my plan more as a nice gesture for me.”

When he ran it by the head of the Canadian Amateur Hockey Association (now Hockey Canada), which was responsible for the country’s national junior team, he received no opposition. It didn’t hurt that the year before, Bassin was the head coach of Canada’s national junior team when it won its first gold medal.

Until the Canadian Jewish News published an article earlier this year about Bassin’s now bygone subterfuge, few people outside of the team and his family and friends knew what he had pulled off. 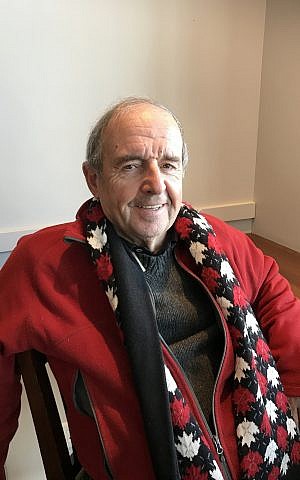 Sherwood Bassin, former general manager of the Canadian Junior hockey team who smuggled religious items into the former Soviet Union for the Jews of Saint Petersburg. (Robert Sarner/Times of Israel)

“I never told the story publicly, especially when the Iron Curtain was still there, because I didn’t want to walk around, saying, ‘Hey, we smuggled stuff into the Soviet Union,’” says Bassin, who turned 80 on August 14. “You have to realize that for the Soviets what we did was somewhat criminal. It was an anti-religious state, especially anti-Jewish — if not officially, certainly by conduct — and what I did went against that. I kept it quiet because I also didn’t want to implicate other Canadians in what I did.”

Bassin was surprised by the response to the article from people far and wide.

“The feedback was amazing,” says Bassin, who lives in Oshawa, once Canada’s automotive capital, 55 kilometers (34 miles) east of Toronto. “I received phone calls from all over. My son works for CBS in the [United] States and one of the top executives there saw the article and sent him an email saying ‘I’d like to meet your dad.’ I had a call from a rabbi who’s writing a book on Jews and sports and wants to meet me. NPR in Boston called me for a radio interview with them.”

A couple of people jokingly told Bassin he shouldn’t travel to Russia now that he’s been exposed.

While touched by all the accolades for a deed he did long ago, he’s quick to downplay it.

At the time, I didn’t think it was that big of a deal. I simply saw it as an opportunity for me to do what’s right

“When I hear the reactions of people who say, ‘What an incredible thing you did,’ I don’t look at it that way,” says Bassin. “At the time, I didn’t think it was that big of a deal. I simply saw it as an opportunity for me to do what’s right. All I did was help out people in need. It was connected to our identity and heritage. I’d like to think people would do the same for me if it was an issue.” 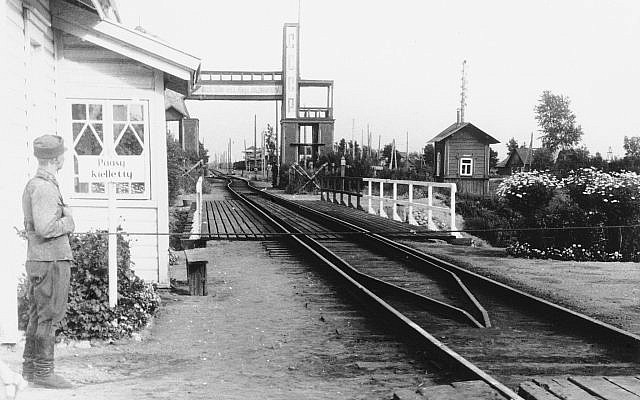 Illustrative: A 1939 photo of the bridge over the Rajajoki River, on the Finnish-Russian frontier, which carried the single track of the railway to Leningrad. (AP Photo)

While on the train to Leningrad from Helsinki where the team had been practicing, three gun-toting Russian soldiers at the border confronted Bassin, asking him what the players had with them. They immediately confiscated his magazines but didn’t look inside the hockey bags. Soon after, Soviet authorities seized all their luggage, including their equipment bags, which they only released after Canada threatened to pull out of the tournament.

Bassin would eventually remove all the prayer books and shawls from the hockey bags, place them in a large cardboard box and take it to Leningrad’s Grand Choral Synagogue. After proving to congregants he wasn’t a KGB agent but merely a Canadian Jew in town for a hockey tournament, he opened the box, much to the delight of his co-religionists who repeatedly voiced their gratitude to him.

“My motivation was, let’s make some wrongs right,” says Bassin in his distinctive, raspy voice. “These were harmless people following their faith. The real issue — and we learn this as Jews — is to help people in need. That’s what we’re about. And that’s what’s everybody should be about. If you can help your own people, the question is not why, the answer is why not.” 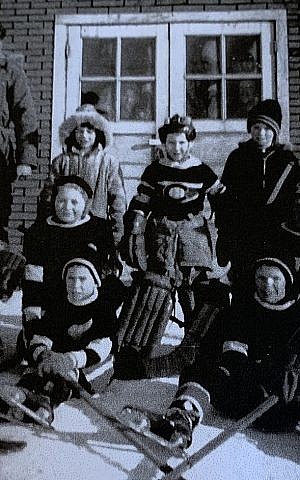 Such proactive thinking reflects the values Bassin’s late father imbued in him. Before immigrating to Canada in 1924 from his native Ukraine, his father and family lived through poverty and fierce anti-Semitism. They moved to the Canadian prairies, settling in the agricultural village of Semans, Saskatchewan, where Bassin grew up in a kosher home.

“When I got involved in hockey as a boy in Semans,” Bassin recalls, “my father said to me, ‘Hockey, shmockey! You can play all the hockey you want but you’re getting an education first.’ It was a big issue for him.”

Bassin was a skilled player but not good enough to make it to the professional leagues. Instead, he earned degrees in pharmacy and law before moving to Toronto to work in the legal division of Canada’s Food Directorate.

After achieving success as a coach and manager in minor hockey, he graduated to the Ontario Hockey League (OHL) where he transformed three franchises in Canada and the US into champions. At one point, he became Assistant General Manager of an NHL team and also led Canada’s national junior team to two gold medals in world championships.

“Shortly before my father died, he told me in the hospital he had three requests of me,” says Bassin, who quoted his father with great reverence. “’One, make sure you look after your mother, she was a good wife and a good mother. Two, don’t lose your Jewish identity. If you strip yourself of your Jewish identity, pretty soon you won’t be able to identify it. And three, don’t forget about Israel.’”

It took being invited to coach Canada’s team in the inaugural World Jewish Hockey Tournament in Israel for Bassin to finally visit there for the first time in 2007. Since then, he’s returned several times in connection with the tournament and the Canada-Israel Hockey School in the city of Metulla. Founded and funded largely by Toronto philanthropist Sidney Greenberg to promote coexistence and help break down religious, language and ethnic barriers, the after-school program has hundreds of Jewish, Muslim, Christian, and Druze children in the north of the country learning the sport together and playing on the same teams.

Back home, as always, Bassin takes a particular interest in the few Jews finding success in hockey. He’s met with David Levin, who has played the past four seasons in the OHL and is hoping to become the first Israeli-born player to be drafted by an NHL team. 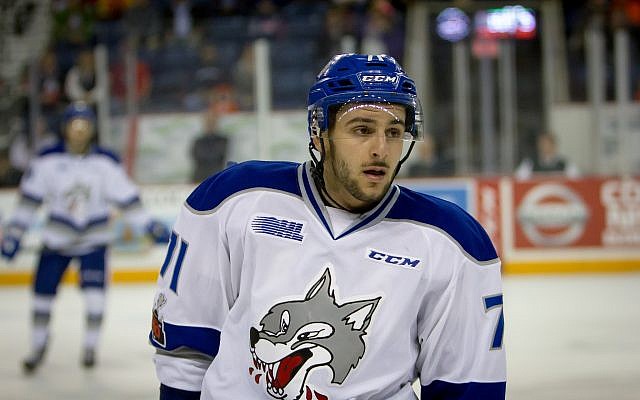 “David’s a nice kid, but he’s got his work cut out for him,” says Bassin. “He has the ability but that’s not enough. Many players have the skills but lack the drive and commitment. I actually lectured him because I didn’t think he was working hard enough on the ice. I told him, ‘You need to have a work ethic, on the ice and off the ice.’ The reason I was so direct with him is because he’s Jewish. I told him he has a responsibility because he’s from Israel and Jews are hoping he makes it to the NHL. This season, he played much better.”

I told him he has a responsibility because he’s from Israel and Jews are hoping he makes it to the NHL. This season, he played much better

Speaking of commitment and drive in hockey, Bassin cites Zach Hyman,
the Jewish left winger who, since joining the NHL’s Toronto Maple Leafs in 2016, has become an important member of the team. Hyman, grew up in Toronto, attended a local Jewish day school, speaks Hebrew, writes children’s books and is extremely popular with Canadian Jews — in part due to his involvement in the community.

“Talk about commitment, drive and willpower,” says Bassin. “I’ve talked to Zach several times. He’s shown 100 percent commitment to get where he is today. He’s a wonderful young man, an excellent example of someone with a lot of character, which has helped make him the player he is and a vital part of the Leaf team.”

Today, despite his advanced years and suffering from osteoarthritis, for which he’s had numerous joint-replacement operations, Bassin remains engaged with hockey. Recently, the French River Rapids, a team in the Northern Ontario Junior Hockey League, announced it had retained him as an advisor and to assist in player development in the coming season.

Is it worth moving to the USA ? 🇺🇸

Spread the love Many Nigerians continue to travel to Canada in pursuit of higher degrees and greener pastures, as the newly-released Canadian Study approval list revealed that Nigeria ranks 8th in the ratings of countries […]