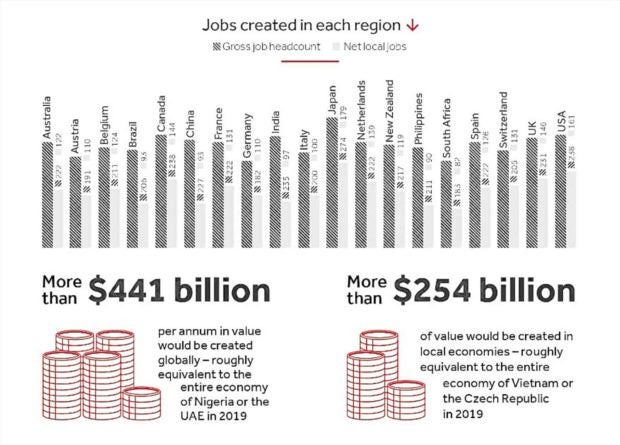 The Philippines stands to significantly benefit from the rise of flexible office spaces and co-working locations outside key city centers.

A report entitled “The Flex Economy” showed that by 2029, the Philippines is forecast to see $1.28 billion of gross value added (GVA) per year through a portfolio of flexible workspaces that will rise in small towns and cities and suburban locations. This is on top of the quality jobs that can be generated between now and 2029 as well as the hefty savings in terms of commute time and reduction in carbon footprint.

Regus, one of the pioneers of flexible workspace and an operating brand of IWG plc, appointed Development Economics in July this year to identify socio-economic benefits that go with the development of flexible office space in secondary towns and cities and in suburban locations. The 19 countries included in the study were Australia, Austria, Belgium, Brazil, Canada, China, France, Germany, India, Italy, Japan, the Netherlands, New Zealand, the Philippines, South Africa, Spain, Switzerland, the UK, and United States.

In the Philippines, flexible working spaces have been gaining ground over the last several years but these are mostly in key cities and central business districts. Regus’ report explored the great potential benefits of flexible spaces rising within untapped areas in tier two cities and suburban areas.

“When people commute into major cities their wallets commute with them. Working locally keeps that spending power closer to home. What this study shows is that providing more opportunities for people to work closer to home can have a tremendous effect, not just on them, but on their local area too. Businesses also recognize the benefits and we are seeing increasing demand from companies of all sizes for flexible space in smaller cities and towns. Larger businesses are opting for a ‘hub and spoke’ real estate model. At the same time, smaller enterprises want to cluster and collaborate, and so choose flexible workspaces to be near other businesses,” said Lars Wittig, Regus country manager for Philippines, Thailand, Vietnam, Cambodia, South Korea.

According to Wittig, there are already hundreds of centers in these types of locations, some of which have populations as little as 10,000 people. Regus, for its part, plans to open many more as this trend continues. The vision is to have a professional workspace available on every corner in the near future.

“IWG contributes by enabling businesses from Metro Manila and abroad to expand into tier two cities, thus alleviating the exaggerated demand for labor, workspace, transportation, etc. within the national capital region, and allowing for inclusive growth for the provinces,” Wittig said.

“There is a great potential for development of human capital in the Philippines, and we find universities in all top 10 to 15 tier two cities. Moreover, with our national and international network, we enable rural entrepreneurs a platform to launch their businesses into the larger domestic and even global markets. We see growth today above national average in Clark, Davao and Cebu, but also Iloilo, Bacolod, Dumaguete, General Santos, Cagayan de Oro, Naga, Subic, Clark and as far north as Laoag,” he further explained.

More staggering social, economic and environmental benefits can be expected from the rise of flexible workspaces outside city centers. Data from the Regus report further revealed that by 2029, there could be a total of over 74,000 people working at local business centers across the Philippines, providing net additional employment opportunities for local residents amounting to over 31,600 jobs.

These include temporary jobs created to fit-out existing office space and ready it for its new role as a flexible workspace; permanent jobs needed to run the space; and jobs attached to the businesses that occupy the flex space.

An average flexible workspace in the Philippines, the report further stated, can generate P186.46 million in GVA each year, of which P78.7 million contributed to the local economy.

This value creation is seen to come from local procurement and multiplier effects, pertaining to tapping services such as utilities, security, cleaning, catering and maintenance, and additional spending from workers staying in their local communities whether for lunch, post-work drinks or convenient services such as dry-cleaning. It can also include the impact of flex spaces in boosting the local property markets. 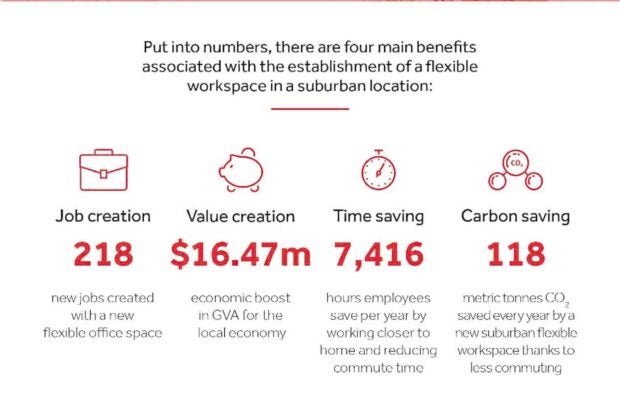 Filipinos can thus save 4,423 hours, which can be used for personal purposes. This has wider benefits as a shorter commute has been shown to reduce stress levels, thereby increasing staff morale and resilience, as well as mental well-being.

Having flexible workspaces nearer your residence will also significantly reduce the length of commuting trips and consequently, fossil fuel consumption and carbon emissions. It was estimated that a total of 50 metric tons of carbon dioxide emissions would be avoided from over 483,000 Filipino passenger kilometers that are no longer required due to shorter local commuting trips.

Meanwhile, the Regus report showed that the rise of flexible workspaces in “outer-city” locations is seen to contribute more than $254 billion by 2029 to the 19 economies assessed in the study.

It is expected that close to 6.4 million will work in flexible workspaces globally by 2029, roughly three times the population of Paris; about 3.4 million local residents will find work thanks to the flex spaces; some 8.4 million days of personal time will be saved from reduced commuting times, enough time to go to the moon and back more than 1.4 million times; and 2.56 million metric tons of carbon dioxide will be saved globally, equivalent to the emissions of 1,280 flights between London and New York.

Partnership visa declined, despite the couple having “lived together”

[ad_1] Is it just about “living together” requirement that Immigration New Zealand is declining en-masse applications of partners of Kiwi-Indian citizens and residents? Or there is something more? At least the story of Antoney Aleena, […]

[ad_1] I requested that Jack’s EPA, his eldest son, get him out of there as soon as possible. I wanted Jack home. I’d done the research and knew perfectly well I would be able to […]

Merit based immigration is very important: US President Donald Trump

[ad_1] On May 17, US President Donald Trump remarked about the immigration system based on merit that can help hundreds and thousands of foreigners as well as professionals of Indian origin and those who are […]