An immigrant couple who was detained by immigration authorities after attempting to visit their daughter at a military base has been released from custody to their home in Brooklyn. The couple spoke to reporters Thursday about their ordeal. (July 26)
AP

The solution to America’s immigration problems is open borders, under which the United States imposes no immigration restrictions at all. 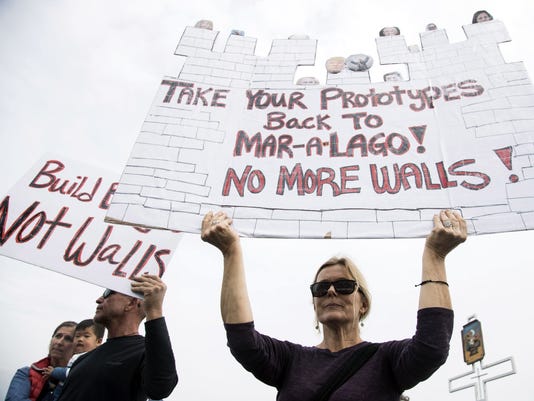 President Donald Trump’s recent tweets against open borders come as no surprise. Indeed, even fervent immigration advocates worry that open borders would lower the wages of low-skilled natives, erode national security, and overburden the social safety net. Trump doubled down, tweeting that he would be “willing to ‘shut down’ government” unless Congress approves funding for a border wall with Mexico.

Trump, however, has it exactly backwards: The solution to America’s immigration problems is open borders, under which the United States imposes no immigration restrictions at all. If the U.S. adopts this policy, the benefits will far outweigh the costs.

Government will then have no need to define or interpret rules about asylum, economic hardship, family reunification, family separation, DACA (Deferred Action for Childhood Arrivals) and so on. When all immigration is legal, these issues are irrelevant.

Think about the money we could save and make

Last year, U.S. employers filed over 336,000 petitions for H1-B visas for highly skilled foreign workers, but only 197,129 were approved. Complicated visa rules — for tourists versus job-seekers, STEM (science, technology, engineering and math) workers versus agricultural laborers, and students versus non-students — would all vanish. This would save resources and give employers new access to talented human capital.

More: My grandfather wouldn’t be allowed into America under Donald Trump’s policies

I was a ‘lost boy’ of Sudan and the US welcomed me. More refugees deserve that chance.

MS-13 beat me up and threatened to kill me. Then the US government took my kids.

The time people waste re-entering the country will evaporate. How often do you face long delays when entering Oklahoma from Texas? Never. But how often do you experience delays when you leave other countries for the United States? Almost always. One study pegs the cost of wait times at the U.S.-Mexico border alone to be more than $12 billion a year.

Economic efficiency will increase both in the USA and in immigrant-sending countries, because different kinds of labor will be better matched around the world to their most productive activity. This benefits the immigrants who earn higher incomes, but also U.S. consumers who face lower prices for imported goods and services. One academic study predicts that if borders were open everywhere, world gross domestic product could be twice its current value.

They will send their best

The government’s fiscal balance could actually improve with more legal immigrants earning income and paying taxes in America. And under open borders, any added immigration will plausibly come from those with even higher skills and incomes, who faced weaker incentives to immigrate when faced with the burden of current restrictions.

Expenditure on the welfare state will contract because even if immigrants vote for welfare spending, existing residents will vote for less generous benefits when they believe these accrue to recent immigrants.

What about possible bad outcomes of open borders?

Immigrants will not flood into America, although the rate of immigration might increase. Instead, much of the immigration will be temporary. Return migration happens because most people want to be near their families, surrounded by their own language, culture or religion.

If immigrants know they can re-immigrate, they are less likely to put down roots. Instead, many will come for a few years, to work or study, and then depart. This happens routinely in the European Union, which has mainly abolished immigration restrictions among member states, and it was common historically during periods of relatively open borders. Plus, increased immigration will lower wage differentials across countries, reducing the incentive to immigrate.

Crime will not skyrocket. Available evidenceshows that immigrants are no more crime-prone than natives. And the additional immigrants likely to enter under open borders would plausibly be even less so, because they have shown respect for the law by not immigrating illegally.

Terrorists could well enter via open borders, but they do so now illicitly. Little evidence suggests that our immigration restrictions prevent terrorist attacks.

U.S. culture will not change dramatically. America’s immigrants have a long history of assimilation, and most have at least some affinity for American values. Indeed, the world is already more “Americanized” than ever. Even if values and culture change, so what? That happens in free societies. Who says America’s current values — some of them deeply evil — are the right ones?

Open borders are not without risks. Social safety nets might come under pressure, and natives will face added competition for jobs (though the evidence on this is mixed).

Ultimately, immigrants have always been vital to America’s economic strength and to its commitment to freedom. Since its founding, the United States has grown from a motley collection of colonies to one of the richest countries in the world, with some of our fastest growth occurring when immigrants arrived in large numbers.

America has nothing to fear, and much to gain, from open borders.

Jeffrey Miron is director of economic studies at the Cato Institute and the director of undergraduate studies in the Department of Economics at Harvard University. Follow him on Twitter: @jeffreyamiron

Spread the love In this video, we are going to look at top 5 easiest, cheapest and fastest way to immigrate to Canada. This is the best comprehensive list of ways to immigrate to … […]

Republican candidate for Congressional District 2, Peter Yu, spoke to the Summit Daily about his platform.

Spread the love This week, the Summit Daily profiles the second congressional candidate for Congressional District 2 in the 2018 general election, Peter Yu, the Republican candidate running against the Democratic candidate, Joe Neguse, who […]