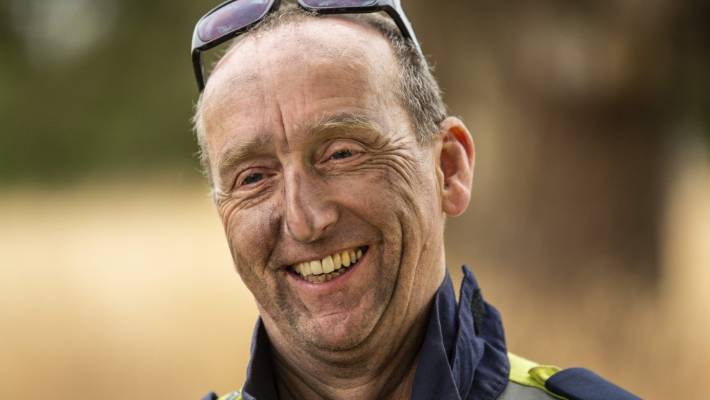 A seven-year battle for NZ residency continues for Steve Webster and his family after their latest bid to permanently stay in the country was declined by Immigration Minister Iain Lees-Galloway.

A petition to help a Nelson volunteer firefighter gain permanent residency has topped 50,000 signatures but has failed to sway Immigration New Zealand.

In a letter sent on April 23, Lees-Galloway said he was not prepared to grant residence to Webster and his family but had granted him a 24-month work visa. His wife Gail and daughter Rebecca were also granted corresponding 24-month open work visas.

The plight of Webster and his family gained national attention when he was photographed while helping fight the Pigeon Valley forest fire in Nelson in February.

Lees-Galloway was approached for further comment but said it was “not appropriate for me to comment on individual cases.”

Civil Defence released footage from a flyover of the Pigeon Valley blaze in the Tasman region.

Webster said the ongoing uncertainty of their immigration status was taking its toll.

“It hasn’t really helped us because it doesn’t give us any real future security we’re just in limbo – we’ve just been living on one and two year extensions, just hoping to get a change of heart,” he said.

Webster said while he loved New Zealand and wanted to stay, daughter Rebecca had given up on her future residency prospects and was currently planning on heading back to the UK. “It’s tearing my family apart.”

The Webster family arrived in New Zealand from Britain in 2012 on an entrepreneur work visa.

As part of their work visa the family bought a florist business in Nelson before arriving in the country.

“The business was approved and we submitted a business plan – when we actually arrived we found we’d been conned and the business was virtually bankrupt,” Webster said.

Instead of an initial aim to build the business up over three years, it took the Websters 18 months to get back to the envisaged starting point.

“We pushed really hard to meet the targets we’d given to Immigration, but in the end we were about six months short,” he said.

“They had the choice of giving us an extension to see if we’d do it but they chose not to – we actually made the target six months after that but they couldn’t give us the opportunity, so we appealed but they wouldn’t change their mind.”

Seven years later, Webster now worked for a car dealer in Nelson and was a member of the Stoke volunteer fire brigade, while Gail continues to run the florist business.

A petition was created by his friend and former volunteer firefighter colleague Ken Mahon.

The petition had gained 53,000 signatures by the end of April and had been sent to the minister ahead of the decision.

Speaking on Monday, Mahon said he was disappointed that the petition’s high level of support had failed to influence the decision, but the latest setback had not deterred him from trying for a positive outcome for his mate.

“Obviously I want to keep fighting it and try to get the best result – I was out with Steve on a charity ride over the weekend and the poor bugger’s just looking so down-trodden – they have got no certainty at all, it’s just gut wrenching.”

Nelson MP Nick Smith had been working with the family to address their immigration issues for several years and had written to Lees-Galloway on their behalf.

He said he would continue to advocate for the family where he could and hoped the Websters decided to stay in the country as the family were likely to make further important contributions to the community in the long-term.

“I’m encouraging them to hang in there, but the minister has obviously made things more difficult for them.”

COVID-19: Singapore Reopening of Travel and Changes to Border Measures

[ad_1] The Multi-Ministry Taskforce has announced plans for a progressive reopening of Singapore’s economy and society as it emerges from the coronavirus (COVID-19) crisis. The taskforce has also been reviewing the border measures put in […]

What are the 2018 best jobs in Canada under Express Entry ? Canada’s federal government plans to welcome near 1 million immigrants over the next three … source YouTube Related Posts:Global Monoclonal Antibodies IndustryMovies on […]

Clearing the clutter on partnership visa issues: What do you need to know?

[ad_1] Effectively now there will be three visa options available for partners of not only Kiwi citizens and residents, but also those on temporary visas to come to New Zealand. Partnership Visa Culturally […]