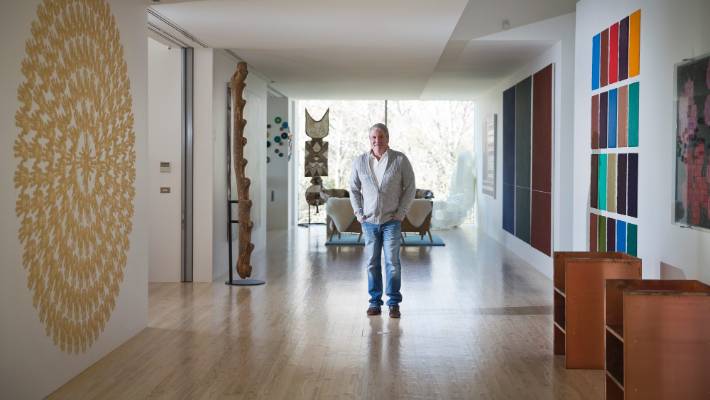 Mahana Estates owner Glenn Schaeffer is being sued by friends and investors from Las Vegas.

Embattled Mahana Estates owner Glenn Schaeffer says he is being sued by his friends in an attempt to destroy both him and the upmarket winery.

James Murren​, chief executive of MGM Resorts International, and Daniel Lee, who was involved with another casino company based in Las Vegas, first brought the lawsuit against Schaeffer in 2015, seeking to recover the $3.5 million they invested in the business.

Schaeffer gave evidence in the High Court at Nelson on Monday and denied any misrepresentation of the funds invested by Murren and Lee, whom he described as “good friends”.

“What started out as a lifestyle investment among eight close friends has devolved into unfortunate litigation, creating insecurity about the future of an up and coming world class winery and events centre,” he said.

He said the case brought against him by Murren had caused his family “significant anxiety” and was an attempt to “destroy” him and the Mahana winery.

Schaeffer met vineyard owner Philip Woollaston in 1999 and the pair purchased land and established a new vineyard and winery together, originally known as Woollaston Estates. It was part of a plan for the Schaeffers to obtain permanent residency in New Zealand.

He approached Murren and Lee, who he said were interested in investing in the venture as it could provide a path to residency. The court heard from both men last week who disputed they had any interest in living permanently in New Zealand.

Schaeffer told the court preliminary discussions with Murren and Lee about the winery investment did not cover ownership structures or shareholders.

“I believe that we were all thinking of it as a friends and family proposal without much importance attached to the finer details.”

Murren and Lee said they signed an agreement stating they were in a partnership that had an 80 per cent interest in an entity, known as Kiwi Ventures, that owned a winery and vineyard in Nelson.

Both said their payments were not used to make the investments promised, but were instead used by Schaeffer to acquire assets that he now held as a shareholder of his company.

Schaeffer said the investors were aware of the company structure from the reports they had been given and none of them had raised issues with the way shares were held.

Correspondence between Schaeffer and the investors made references to “our land”, “our vines” and “our winery”, but Schaeffer disputed they were an indication of ownership.

He said the winery had not performed as well as he had hoped, and since 2008 he had not sought any further funds from the investors. Between 2009 and 2016 Schaeffer and ex-wife Renee Schaeffer made a series of loans to the winery companies that he estimated were around $2.5 million.

During cross examination, Murren’s lawyer Andrew Horne said Overseas Investment Office (OIO) approval was needed for the 2001 purchase of land that would later become the winery.

Schaeffer said he couldn’t recall making an application to the OIO and it had been handled by Woollaston. For subsequent land purchases he had “hired experts” to do the applications for him so he was not “personally familiar” with the rules of the OIO.

Horne said the 2006 agreement signed by investors set out the structure of the partnership and how it was to be managed. But Schaeffer said the agreement gave him the power to elect the structure that controlled the company assets.

“No investor would have regarded it as necessary or appropriate for you to own all the assets in your own name,” Horne said.

He said if Schaeffer was hit by a bus, for example, there was no legal document to prove the ownership of assets, so the investors would be left with nothing.

Horne also alleged Schaeffer never transferred the shares into the Kiwi Ventures partnership as the foreign investment would have significant regulatory and tax implications. Schaeffer denied that was the case.

Concerns were also raised over the “intermingling” of personal and business expenses, specifically in relation to renovations to Schaeffer’s Mahana villa as detailed in an spreadsheet sent to his accountant.

“I did not enact those transactions, I put money in with a clear expectation that personal expenses would be paid by me and things that were for the company were to go to the company,” Schaeffer said.

Horne disputed that Schaeffer had no idea his family trust was loaned money from Kiwi Ventures.

[ad_1] This article is from Hakai Magazine, an online publication about science and society in coastal ecosystems. Read more stories like this at hakaimagazine.com. Back when Ireland still had lighthouse keepers, the town of Dingle […]

Bulgaria: Hundreds of nationalists march through Sofia in anti-immigration protest