TOKYO — PopIn, a Tokyo-based Internet company, marked its 10th anniversary in July at an event in Roppongi Hills, an upscale business and commercial complex in Tokyo.

The company’s founder and CEO, Tao Cheng, held the event to thank his backers. Originally from China, Cheng came to Japan in 2001, earning a master’s degree in information technology at the University of Tokyo. While still at school, Cheng launched popIn based on a technology he developed. By selecting words on a webpage, the reader can generate search results without having to jump back and forth between different pages.

Cheng was awarded a patent for the technology in Japan under the name of the University of Tokyo. Having obtained exclusive rights to the technology, he set up his business in 2008 with help from the university. PopIn now focuses on recommendations for related articles and online advertising. The company does business in South Korea and Taiwan, as well as Japan. It was bought by Chinese internet search leader Baidu in 2015.

Governments around the world are eager to attract ambitious engineers like Cheng who want to start their own businesses. In the U.S., 28 out of the top 50 companies by market capitalization, among them well-known Silicon Valley names, were started by immigrants or their children, according to Mary Meeker, a renowned American venture capitalist.

While the U.S. has a long tradition of welcoming newcomers from abroad, a similar trend is visible elsewhere. In the U.K., nearly 15% of all companies are established by foreign nationals. A recent study found more than 40% of new businesses in Germany were set up by foreigners.

Japan, too, is trying to promote the growth of new companies, especially “unicorns” — unlisted startups with an estimated value of $1 billion or more. Drawing talent from overseas, as well as Japanese who have studied abroad, will help with that effort. It will also make Japan’s businesses more diverse and facilitate their expansion into overseas markets.

But there are a number of obstacles standing in the way. One is visa requirements. These days, more countries offer a special visa for founders of startups. But in Japan, people who want to create their own businesses must apply for a “business manager” visa. To qualify, they must have an office in Japan and at least two full-time employees at the time of application.

Japan’s competitors in Asia are easing visa restrictions. South Korea in 2013 created a new resident category to attract tech entrepreneurs from abroad. Since 2004, Singapore has allowed would-be entrepreneurs to apply for a visa even before launching their startup. In China, many who have studied in the U.S. have returned home to start businesses, playing a leading role in the development of internet services in that country.

Japan, too, in 2015, eased visa restrictions in designated special economic zones. But red tape continues to stifle the expected startup boom. The government had accepted just 70 foreign entrepreneurs under the program by the spring of this year, apparently due to the geographic restrictions. The Justice Ministry is considering expanding the program nationwide and allowing foreign startup founders to remain in Japan longer.

Making it easier for overseas tech entrepreneurs to obtain a visa is necessary but not sufficient when it comes to persuading them to come. “What is lacking [in Japan] is a marketing mindset to attract overseas talent,” said Yohei Shibasaki. The former Sony employee set up Fourth Valley Concierge, a recruiting consultancy, in 2007. Since then, the company has supported the hiring of foreign IT engineers and other foreign workers in Japan.

Fourth Valley Concierge has contacts with about 700 colleges around the world, and helps Japanese companies hire 500 foreign job seekers a year. “Japan is potentially a key hub, able to target the entire Asian market,” Shibasaki said, implying Japan does not do enough to highlight its strengths.

There are good examples to follow. In Montreal, a public-private body acts as a clearinghouse for companies looking to solicit investment by foreign companies and hire foreign talent.

To attract these highly skilled people, governments must create a business-friendly environment and allow family members to settle long term.

Japan has its charms: It is known for its excellent public safety and delicious food, for example. But it has drawbacks as well, not only with respect to visas but for parents looking to educate their children, and in terms of lifestyle.

India, for example, turns out a huge number of IT specialists every year and more are coming to Japan to work. According to Justice Ministry statistics on highly-skilled foreign professionals in Japan, there were about 266 such workers from India as of the end of 2016, 2.5 times more than two years earlier. But those with children have a headache when it comes to schooling.

“New applicants are coming almost every day,” said Nirmal Jain, chairperson of the India International School in Japan in Tokyo. IISJ is accredited by the Tokyo Metropolitan Government and teaches more than 900 students through 12th grade, mostly from India. “We can’t accept any more,” Jain said. Although there are several international schools catering to Indian students in and around Tokyo, “A shortage of school capacity can be a bottleneck in accepting talent in Japan,” she said. 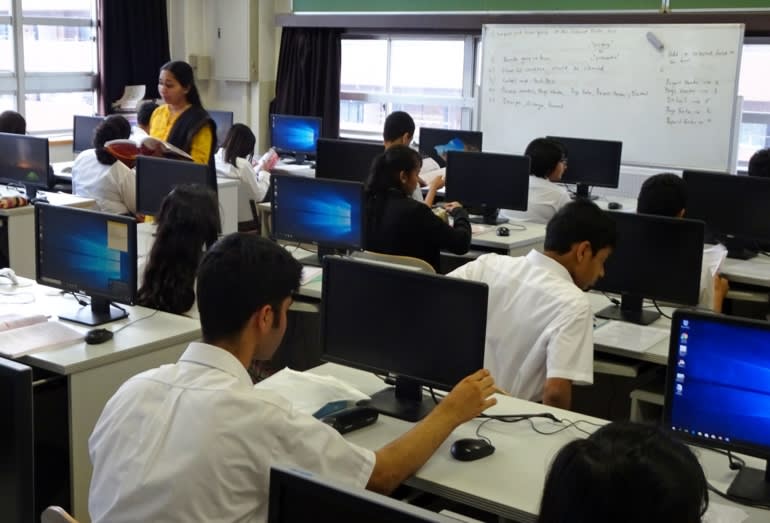 The India International School in Japan, in Tokyo’s Koto Ward, faces the expiration of its lease next year.

IISJ has another problem. Its lease is up in March next year. “There will be no extension,” according to an official with Koto Ward, where the school is located. The school used to be a public junior high school, but the structure, built in 1962, may not stand up to a severe earthquake. “If the school provides us with a viable relocation plan, we may be able to extend the lease until the relocation,” said the official.

Near the school gate, one student holds up a can of juice and asks, “Is this halal-compliant?”

Difficulty in finding food and drink that meet people’s religious dietary requirements is just one more in the long list of obstacles big and small standing in the way of injecting a bit of overseas vigor into Japan’s business scene.

[ad_1] While immigration has long been contentious, the U.S. used to have a bipartisan consensus on accepting refugees. But the Trump administration has drastically reduced refugee resettlement while turning away asylum seekers. What was the […]

The 6 Easiest Countries To Get A Work Visa

[ad_1] Which countries make it easy to get a work visa? Not currently the United States, after President Trump suspended the issuing of new H-1B work visas at least until the end of 2020. You […]