In a quiet corner of the Intelligent Robot Motion Lab at Princeton, Sourish Ghosh, a visiting student from the Indian Institute of Technology, is devising an algorithm to power a test-bed robot that is about the size of a dog and has the ability to run and jump.

Ghosh, who is working with Anirudha Majumdar, an assistant professor of mechanical and aerospace engineering, said the data that eventually will be collected by the robot — which he is fitting with a depth camera and an embedded AI computing device to explore its surroundings — could help guarantee the safety of a variety of autonomous devices. Ghosh said this might include self-driving cars, Mars rovers or even drones that could deliver medical supplies to remote areas of his home country.

This summer, Ghosh is one of 21 participants in the University’s International Student Internship Program (ISIP), which offers promising young scholars the opportunity to conduct research alongside Princeton faculty members. And while the interns learn about the research environment Princeton offers and campus life, they also contribute to the departments that host them.

Ghosh said that in his studies for an integrated degree in math and computer science in India, this type of hands-on experience and access to cutting-edge equipment is unavailable to him. “At my university, we’d have to build these robots from scratch,” he said. 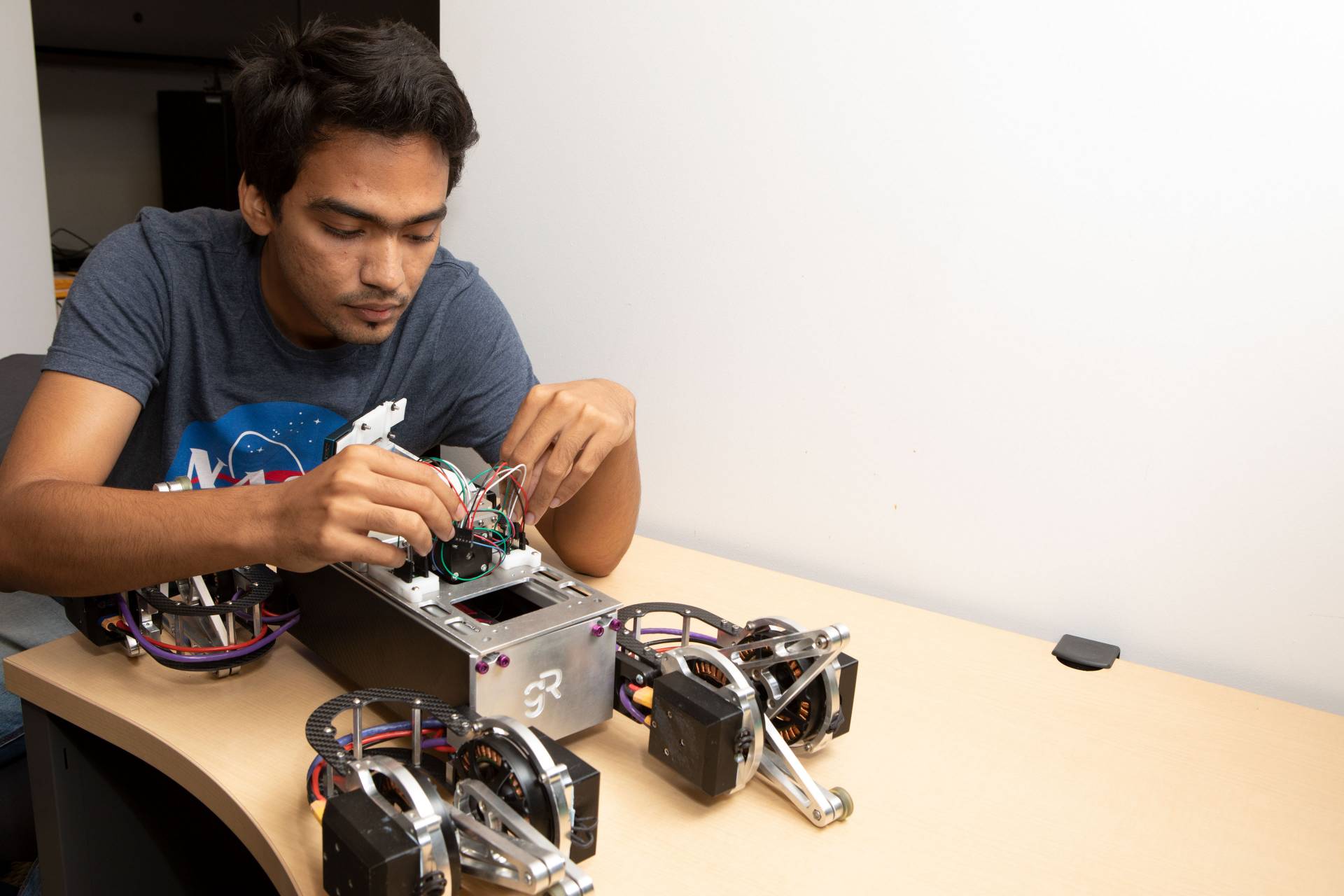 Sourish Ghosh, a visiting student from the Indian Institute of Technology, prepares a quadruped robot that can run and jump for testing in a variety of environments. The algorithm he wrote to power the robot could help guarantee the safety of a variety of autonomous vehicles in real-world circumstances.

“This experience really gives the students a tangible feeling of what it’s like to be doing research in the U.S., and specifically, what it’s like to do research at Princeton,” said Claire Hu, ISIP program director and international affairs and operations associate director in the Office of the Provost.

The nine-week program, now in its third year, runs from June 11 to Aug. 10. This year’s students came from six countries — Brazil, Canada, China, India, Germany and Turkey — and worked in nine departments. They explored fields including nanophotonics, machine learning, plasma physics, population genetics and the political economy of the Middle East.

The program was conceived in collaboration with faculty members who had been seeking a way to bring young international scholars to campus. Yibin Kang, the Warner-Lambert/Parke-Davis Professor of Molecular Biology, said several years ago his department wanted to set up an exchange program with Zhejiang University in China, but found it difficult to navigate the visa requirements and other logistical issues.

The Office of the Vice Provost of International Affairs and Operations worked with the Davis International Center, the Office of the Dean for Research, the Office of the Dean of the College’s Office of Undergraduate Research, and faculty from a range of departments to create a pathway for talented international students to come to campus during the summer. ISIP also has deepened research exchange possibilities for Princeton students. While the Department of Molecular Biology invites four students to campus each year from Zhejiang University, in return, four Princeton students in the Global Health Program go to Zhejiang University to work with researchers there.

“We were very pleased to partner with faculty on the ISIP program,” said Anastasia Vrachnos, vice provost for international affairs and operations. “It enables promising young scholars from around the world to enrich our campus as well as glean a sense of what makes Princeton’s research environment special.”

“It’s a great way for us to attract outstanding students,” Kang said. “These are really top-of-their-class students.”

Shuyuan Cheng, a pharmacy student at Zhejiang University who worked alongside Kang in his lab researching breast cancer cell behavior, said the learning environment at Princeton is distinctive in several ways.

“Professors here are more involved and hands-on,” she said. “I think students here at Princeton and maybe in the U.S. are more confident about themselves and more resolute. They know what they want to do with their lives. That is something that has inspired me.”

Tian Xia, another pharmacy major from China who also worked in the Kang lab, said the experience of being in an American lecture hall provided him with new motivation as a learner. At home, Xia says, students tend to listen silently to a lecture, but here, he said, “people stand up and speak.”

Xia said he challenged himself by standing up during Princeton research seminars to ask questions. “It can really broaden my horizons,” he said. “I’m afraid I cannot express myself well, but I’m trying. It makes you more confident and brave.” 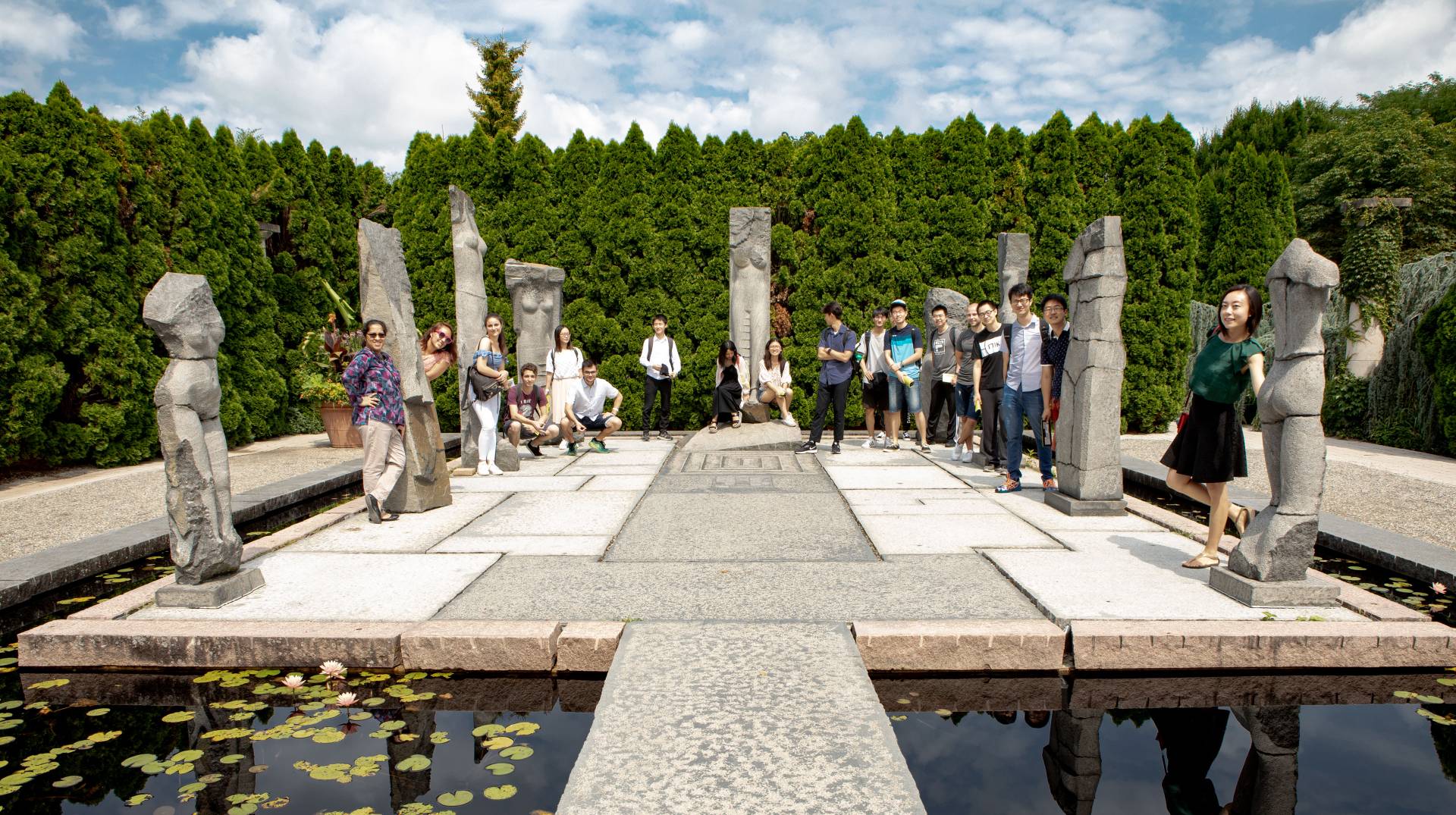 The students took respite from their research and studies to explore Princeton and the surrounding areas. One of this year’s outings was a visit to the Grounds for Sculpture in Hamilton, New Jersey, where they explored Carlos Dorrien’s “The Nine Muses,” among many other artworks.

Like Ghosh in Majumdar’s lab, Andressa Flores Salvatierra, a biological sciences major at the University of São Paolo, has been working on a project that would be difficult to pursue as an undergraduate in Brazil. In the lab of Sarah Kocher, an associate research scholar in the Lewis-Sigler Institute for Integrative Genomics, she has been studying how suppression of a particular gene in bees changes social behavior.

“This is the first time I’m in a research environment every day,” she said. “I’m sort of feeling what it’s like to be in academia — how does it work, the lab meetings and interactions, asking for advice from the lab members who are more experienced. I’ve learned a lot already. I think this is going to be useful for me to decide if I want to stay in academia.”

Kocher said the benefits of their collaboration were mutual. “We wouldn’t have been able to do this project without Andressa,” Kocher said. “It has been a lot of fun. I love the opportunity that ISIP gives us to advise students, to bring people in with all kinds of different experiences.”

Having Salvatierra as a team member also provided Kocher’s own students and postdocs with an opportunity to learn and grow, Kocher said. “I think it’s really important in developing scientific perspective and being able to see problems from different angles, to brainstorm, and I think having that diversity of backgrounds is huge. So the fact that there’s a mechanism here to bring students in from other places has been hugely advantageous to everyone in our group.”

Alejandro Rodriguez, assistant professor of electrical engineering, said he was pleased when his intern, Abhinava Chatterjee, a physics major from the Indian Institute of Science Education and Research Kolkata, in his first week made an important contribution to solving a theoretical problem in thermal radiation that Rodriguez’s group had been working on for two years.

Rodriguez added that the program allows him “to focus my time with a student in a way that’s as productive as possible so the student feels assimilated into the University.” 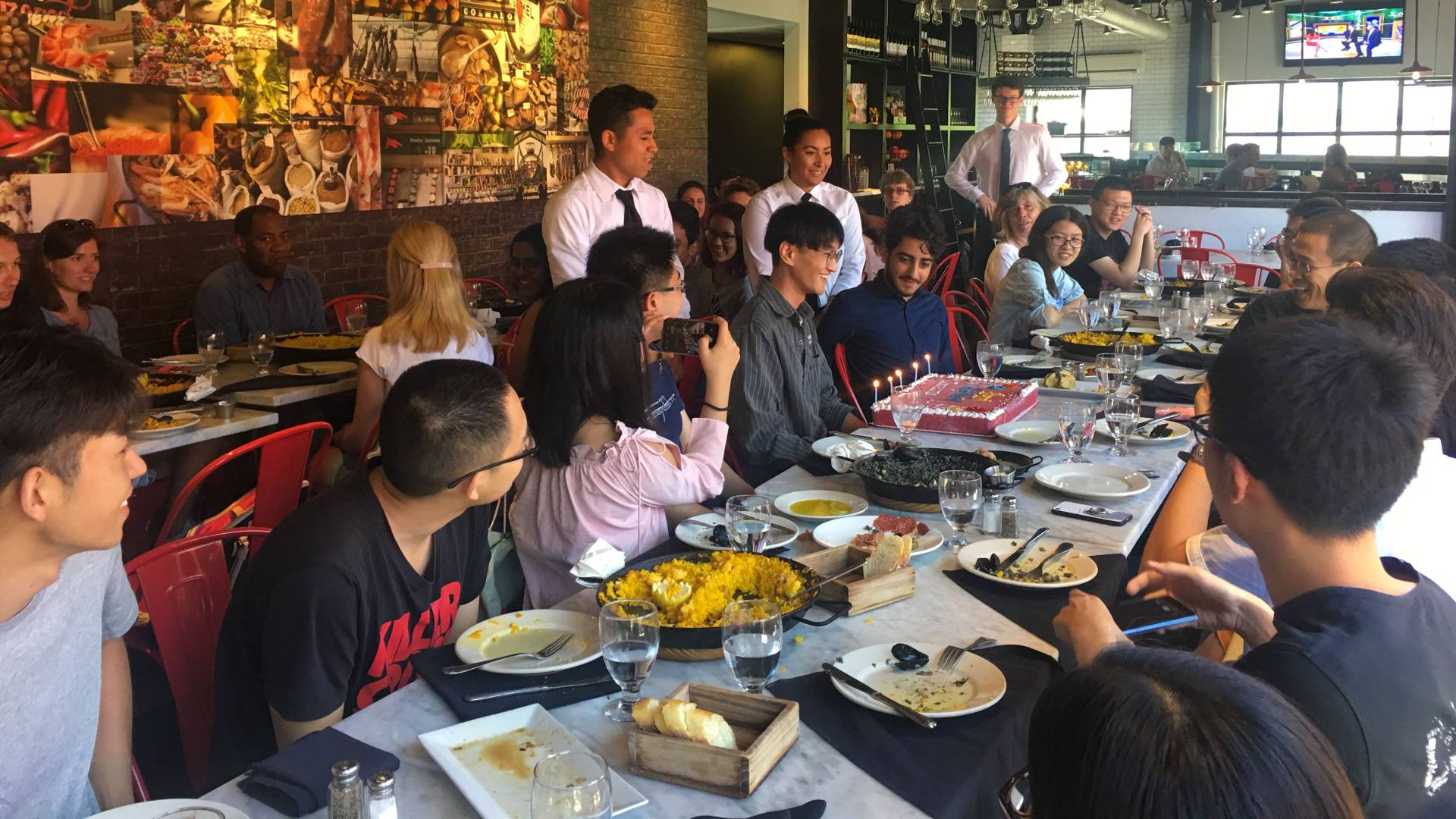 Although the ISIP students are far from home, each year’s cohort becomes part of the Princeton community and also forms its own familial bonds. At the group’s welcome luncheon at Despaña on Nassau Street, Chaozhong Liu of China was surprised with an ice cream sheet cake for his birthday.

Many of the students, after visiting as interns, apply to Princeton for their graduate studies. Several alumni from the pilot cohort have completed their first year of graduate school at Princeton, and more will begin their studies on campus this fall.

“We have been very pleased to see interns from the ISIP program returning to Princeton for their graduate studies,” Hu said. “It suggests that the program is attracting high-quality young scholars who are finding Princeton an attractive environment and choosing to return to campus to pursue their scholarship at the doctoral level.”

Majumdar says, “The most obvious benefit is that my lab has an additional researcher over the summer, with whom I can explore new ideas and get a lot of work done,” but he adds that it has also proven to be a useful recruiting tool for his lab.

Shiyi Zhou, a former ISIP participant from China now studying for her Ph.D. in molecular biology at Princeton, said the program gave her the confidence and reassurance she needed to apply to Princeton. The feedback she received from her mentor Coleen Murphy, professor of molecular biology and the Lewis-Sigler Institute of Integrative Genomics, was especially helpful.

In addition to time in the lab, students found many ways to explore the social and cultural aspects of life at Princeton. Each week the students attended a “Tea & Talk” session where they learned about each other’s home countries, as well as life in the United States. The group also toured Philadelphia and the Grounds for Sculpture in Hamilton, New Jersey.

On their own time, they explored Nassau Street’s culinary offerings and bonded over soccer World Cup matches.

“I’ve had the opportunity to interact with people from many different countries,” Salvatierra said. “I’ve made friends from India, from Germany, from China. It’s been really fun. Exchanging all these cultural things has been very rich.” 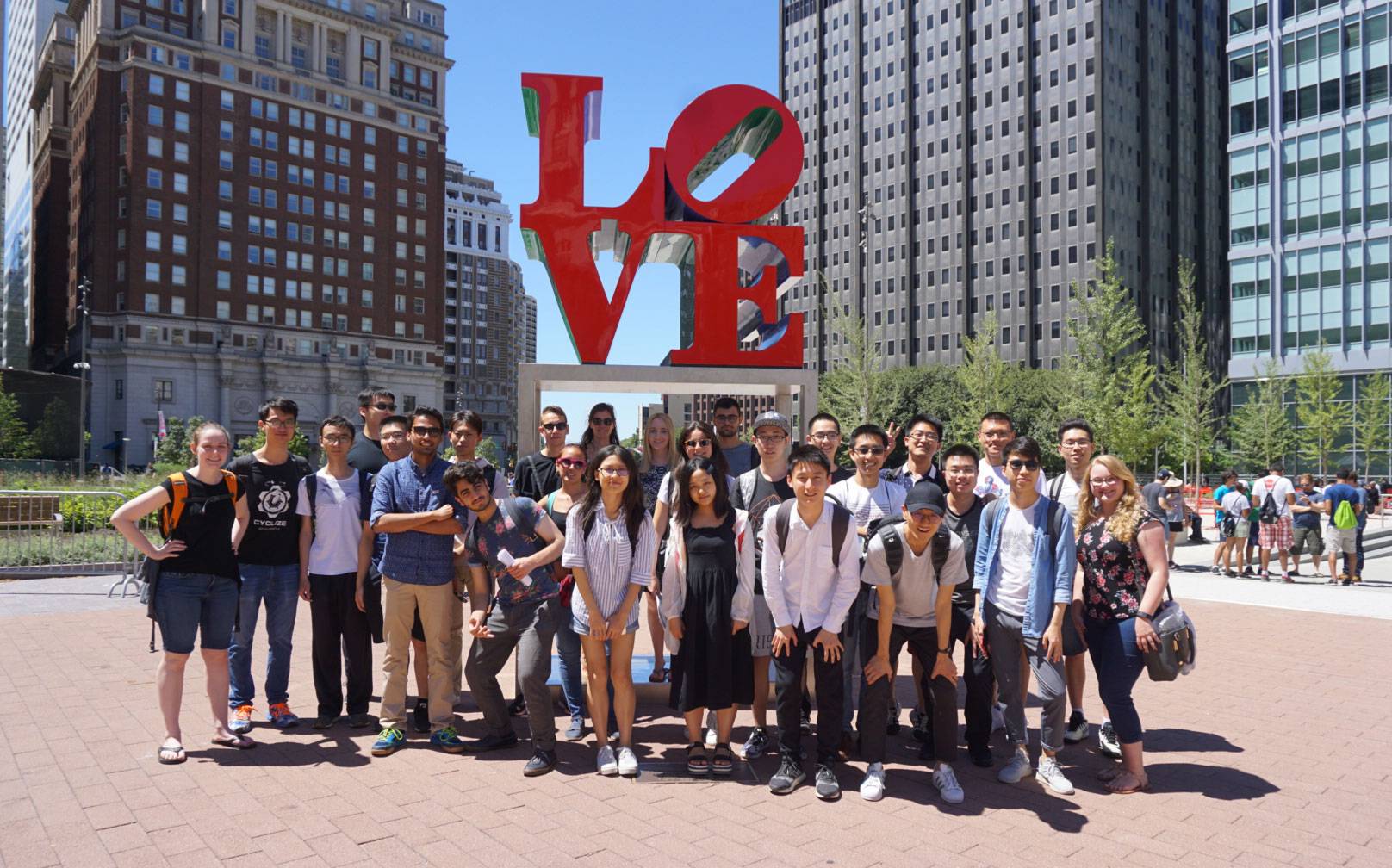 ISIP students, several of whom are visiting the United States for the first time, spent a day touring Philadelphia. Among their stops were Independence National Historical Park, Reading Terminal Market, One Liberty Observation Deck, the Chinatown Friendship Arch and LOVE Park.

[ad_1] Afeez Hanafi A travel agent, Ajayi Philip, is standing trial before an Igbosere Magistrate’s Court, Lagos State, for allegedly defrauding a plumber seeking a two-year visa to enable him to work in Dubai, United […]

[ad_1] A Syrian asylum seeker accused of a killing that sparked a week of far-right street violence in the eastern German city of Chemnitz in 2018 has been found guilty of manslaughter. Alaa Sheikhi, 24, […]