Global interest in technology jobs in the United States is holding steady, despite the volatile political situation related to immigration, according to an analysis by job site Indeed.

But interest has declined in India, which has historically been the largest source of foreign clicks on U.S. tech job listings. That’s the latest interesting data that Indeed has been able to glean from running one of the world’s biggest job sites.

And the tech jobs workers abroad are most keen on are difficult-to-fill, highly paid positions in software development and engineering. 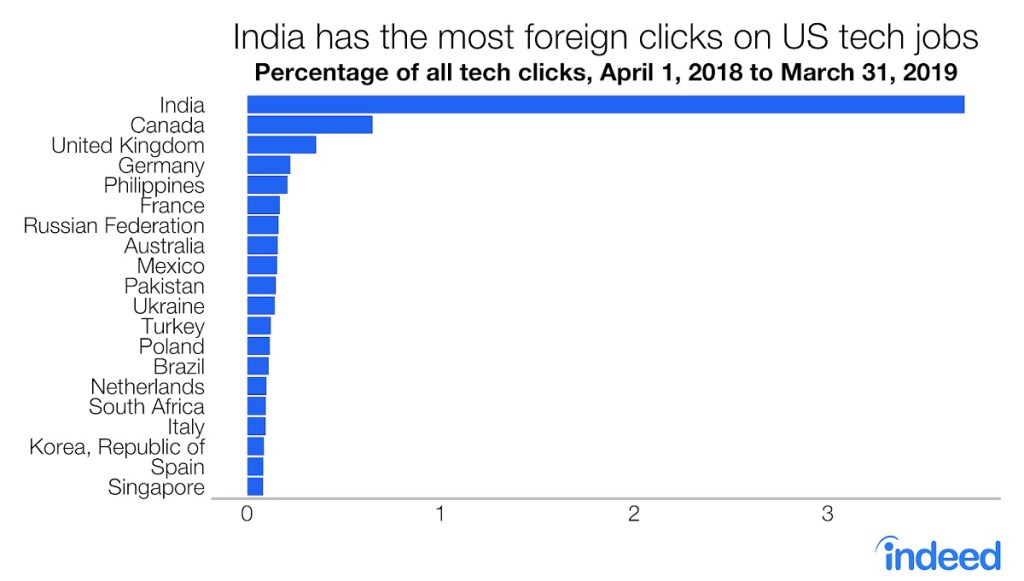 Above: India has the most foreign clicks on U.S. tech jobs by far.

Of the top 10 countries by clicks on U.S. tech jobs, Germany, France, and Russia had the largest year-over-year increases in their shares of all tech clicks, each up more than 25% in the first quarter of 2019. However, India was down 8% year-over-year, while Pakistan fell 37% and the U.K. 12%.

French interest surged from September through December 2018, starting before the Yellow Vests movement, which flared up most dramatically in November. 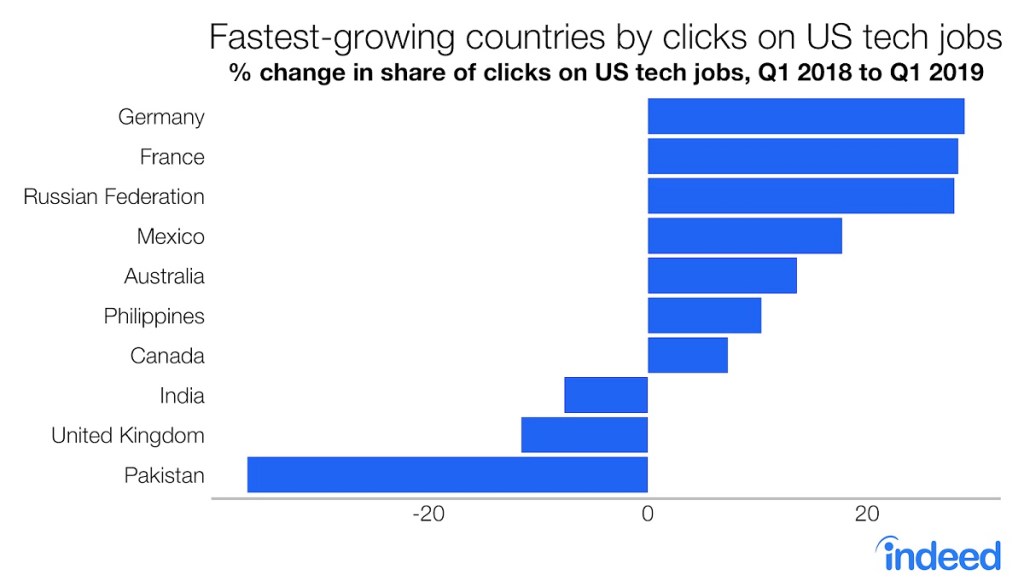 Above: Fastest-growing countries by clicks on U.S. tech jobs.

The tech jobs most clicked on by foreign job seekers in the first quarter of 2019 were all developer and engineer roles. Many specialized, software-intensive positions dominate the list. About 44% of clicks on senior Java developer postings came from abroad.

And whether it’s Python or PHP, Android or iOS, highly skilled programmers from abroad are clicking on U.S. job postings at rates between 27% and 38%. By comparison, of the 571 tech job titles studied, the median foreign click share was 8.7%. 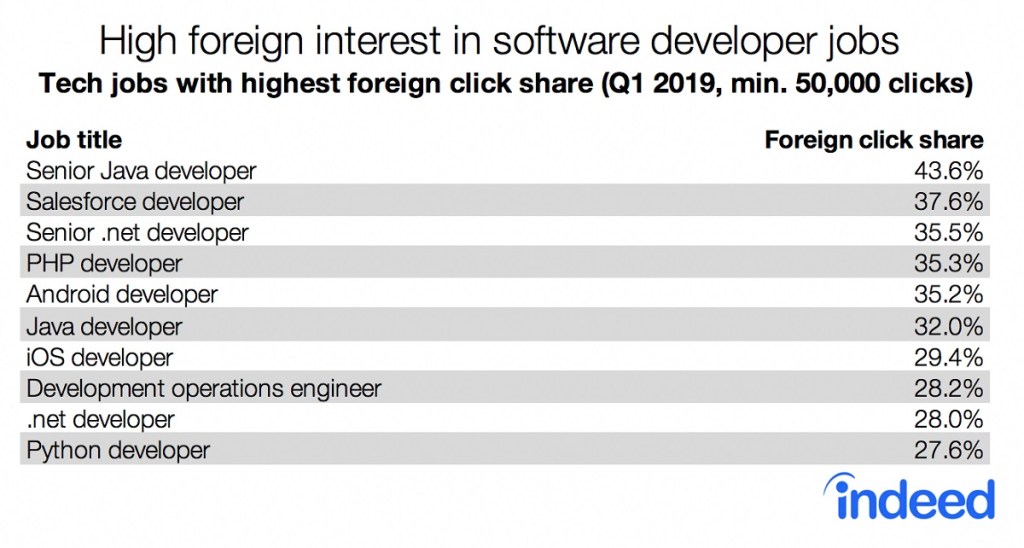 Above: Foreigners are interested in software jobs in the U.S.

On the flip side, the tech jobs that drew the least interest from foreigners included technician and support roles, as well as some analyst and manager positions. For the most part, these tech jobs require fewer technical skills and less education.

A meager 1.6% of clicks on entry-level IT technician came from foreign IP addresses. Other technical support or help desk positions had foreign click shares below 3%, well below the median foreign share of clicks on tech roles.

Foreign interest is highest for difficult-to-fill tech jobs. One measure of this is a job title’s average clicks per posting. The higher the clicks per posting, the greater the number of potential applicants. There is a clear relationship between a higher foreign click share and a lower clicks-per-posting ratio.

Similarly, tech jobs with higher average salaries also had higher foreign-click shares. This relationship may reflect visa requirements. Visas, such as the H-1B, are expensive to process. To make it worthwhile to an employer, these workers should be highly skilled and worth the cost. 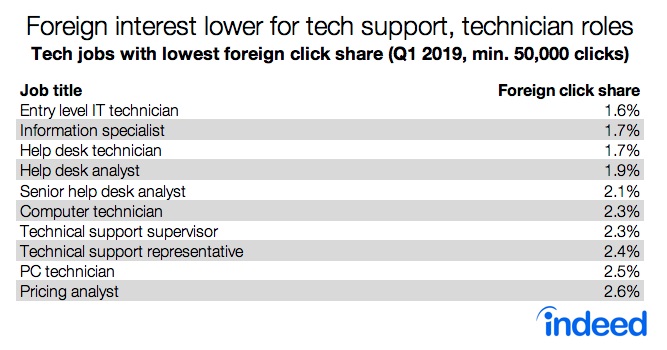 Above: Foreigners are less interested in low-paying tech jobs.

Despite the strident debate over immigration in the U.S., the growth of foreign interest in U.S. tech jobs seems to have held steady over the past year. And, luckily for U.S.-based businesses, these foreign job seekers are interested in tech roles that see fewer clicks. Without foreign job seeker interest in these difficult-to-fill tech jobs, employers would probably have to make big adjustments to find suitable candidates.

Foreign clicks are defined as those coming from IP addresses outside the U.S. Indeed used a list of 571 job titles to identify tech job postings. Only postings based in the U.S. and in English were considered. Indeed looked at the overall foreign and specific country click share on tech jobs from January 1, 2018 through March 31, 2019.

For specific tech job titles, the time period was from January 1, 2019 through March 31, 2019. Tech jobs were only analyzed if they had a minimum of 50,000 total clicks. For salaries, tech jobs needed a minimum of 100 job postings with an estimated salary. The clicks-per-postings measure was normalized to 1.0, based on the weighted average of the clicks-per-posting measure for all tech job titles (weighting by clicks).

I Just Became a Permanent Resident of Canada

[ad_1] The Commission is satisfied with its Western Balkans strategy, as it has triggered a new dynamic in the region. In an interview with EURACTIV Germany, Commissioner for Enlargement, Johannes Hahn, however, pleads for realism. […]

[ad_1] Dear UK nationals in Denmark, I want to thank those of you who were able to attend the Embassy’s live Q/A on Citizens’ Rights on 5 November 2020. It was great to see so […]