SAN MATEO, California — Licensed marriage and family therapist Paulita Lasola Malay marked two milestones on Jan. 27: her 82nd birthday and the blessing of her new office, where she guides individuals and families toward positive thoughts and behaviors for healthy relationships.

You’d think she was 62, the age when Americans may first opt to take their final paycheck and never again report for work, start collecting their Social Security pension and join the multitude in perennial leisure mode.

She did access her entitlement when she reached the official age of seniority, then promptly deposited it into an account for the many trips she takes “at least twice a year.”

Retirement? “Overrated,” says the great-grandmother of six, who sees clients from 10 a.m. until 5 p.m., Monday to Saturday, sometimes even on Sunday.

“I never thought I’d still be working at this age,” says the clinician who has survived a barefoot stroll on live coals to culminate a continuing education workshop — at the tender age of 61.

Why shut the career door for good when she loves a profession that she has never considered “work”?

“I totally enjoy the process,” she says of counseling. “My attitude is: I’m doing what I enjoy most and do best and yet get paid doing it. Wow, I am blessed!”

Carrying on was her brother’s idea. Aircraft engineer and occasional writer Eddie Lasola, now 87, ended his career only two years ago. His little sister is on track to match, if not outpace, him. 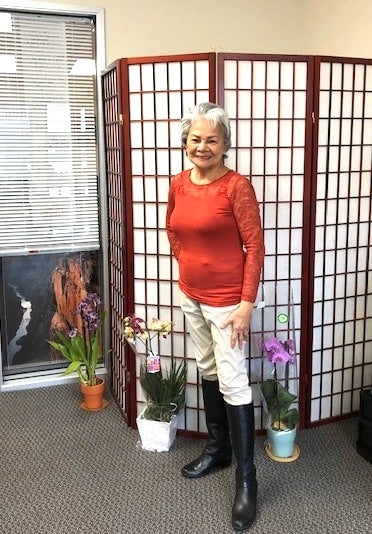 Longevity has allowed Paulita Lasola Malay  to fulfill her many personal and professional goals. CONTRIBUTED

Age is merely a number for Lasola Malay, who became a certified life coach in 2014, when she was 77. She was well into her 60s when she notched certification as counselor for both domestic violence survivors and offenders, the first Fil-Am clinician in to earn both bona fides.

This is the fifth year she is volunteering to lead twice-monthly discussions for Fil-Am elderly with Peninsula Family Service at Lincoln Community Center in Daly City. A founding member of Filipino Mental Health Initiative, she started the regular meetings sponsored by Asian American Recovery Services – Healthright 360 to discuss issues facing Pacific Islanders.

Lasola Malay may be the eldest member of ALLICE Alliance for Community Empowerment, the violence prevention nonprofit that elected her president in 2015, but she wears the highest heels and the latest fashion trends, to the delight of her junior community education volunteers.

“Manang Paul,” as she often refers to herself, was not always the independent self-assured woman who inspires colleagues half her age.

She earned a BA in Social Work at the University of the Philippines, Diliman in 1958 followed by an MS in Guidance and Counseling at De La Salle University Manila in 1976. There are five reasons for the long gap between her degrees: Lito Malay, whom she married in 1960, and their four children who arrived soon after.

“I lost almost all contact with my friends who were working while I was a stay-at-home mom,” she recounts.  “I became totally dependent on Lito, even in crossing streets.” Until a “rude awakening” reminded her of the fragility of life and the value of self-sufficiency.

“I vowed to myself then that I cannot be a helpless widow,” resolved Paulita, who was expecting her third child when her father passed away. “I stayed home for 14 years bearing and rearing two sons and two daughters. When the youngest, Donna, was already in school I went for my master’s degree at DLSU.”

Her father was a key investigator in the case that convicted then-law student Ferdinand Marcos of assassinating Ilocos Norte Rep. Julio Nalundasan in 1935. While waiting for his sentence, the prime suspect took the bar exam in jail, and aced it. The Philippine Supreme Court overturned the conviction, paving the way for the son of Nalundasan’s challenger Mariano Marcos to an ascendant political career. In 1972, Ferdinand Marcos plunged the Philippines in military rule and launched a 20-year repressive regime.

The Lasola family understandably feared for their safety with Marcos holding absolute authority in the country. Eldest daughter Araceli, who had become a naturalized U.S. citizen, petitioned for her mother and siblings to immigrate and reunify with her.

Manila at the time was a portrait of contrasts: the strongman’s cronies flaunting wealth and power at lavish parties, oblivious to the economy’s downward spiral, deepening poverty and propelling mass flight overseas in search of jobs.

Violence escalated in the streets of Manila with the military suppressing opposition to the dictatorship. Civil unrest mounted, pointing to an imminent confrontation between the exasperated citizens and the unconscionable government. As People Power simmered, Paulita, Lito and their two minor children uprooted to America.

Lito Malay showered his wife with gifts and attention back in Manila and in California, where the family settled down in 1986, the year a peaceful revolution ousted Marcos.

Lito was “the #1 reason I never learned to pump gas” even in the US where self-serve is the norm at fuel stations, Paulita cites one of the ways her husband cared for her. He also encouraged her travels with or without him, knowing her passion for globetrotting.

Then 50, the former senior counselor-placement officer at Maryknoll College learned that her master’s in psychology from Manila would not be credited in California. To earn a doctorate, she needed local experience as well. The top post open to her was as assistant counselor at a group home for abused children for $5 an hour.

But pioneer marriage and family therapist Virginia Satir, whom she had met in the Philippines, offered a scholarship at her summer institute in Colorado, leading Lasola Malay to a fresh calling. She lost no time in pursuing a master’s in marriage, family and child counseling at San Francisco State University.

Earning a license requires thousands of hours work under the supervision of a clinician.  Lasola Malay diligently interned at three mental health agencies.  In one, she was assigned cases of four Filipinos with limited English proficiency mandated by the court to get counseling for domestic violence. 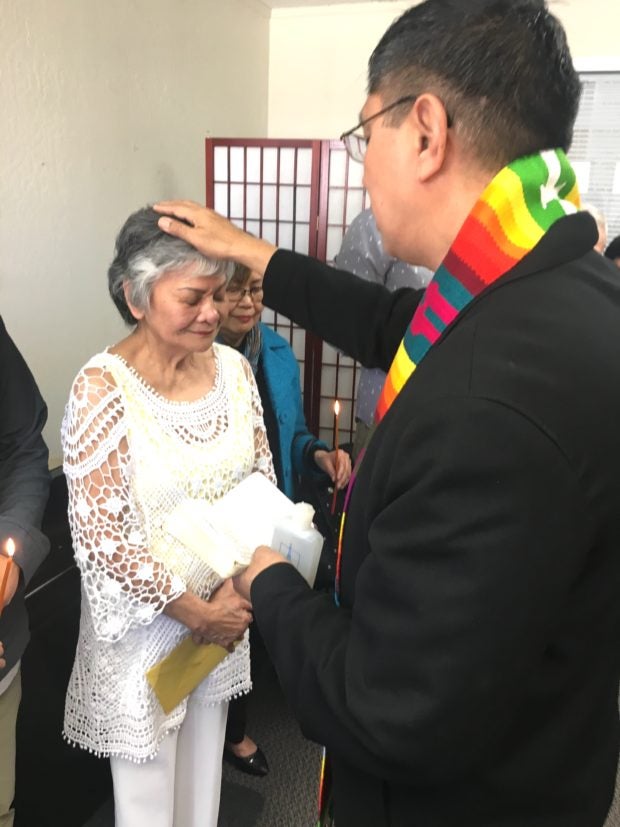 The psychotherapist gets a blessing from Father Francis Garbo on her birthday.  CONTRIBUTED

The task introduced her to a subject still mystifying but making headlines when football legend OJ Simpson was tried and acquitted for allegedly murdering his wife and her friend.  Lasola Malay found her niche and became a certified batterer intervention facilitator.

Upon receiving her license, Malay joined the Center for Domestic Violence Prevention (now CORA) in San Mateo to coordinate its (now-defunct) Filipino American Outreach.  She was the first-known Fil-Am clinician to facilitate a support group for domestic violence survivors, working part-time until devoting herself to her private practice.

She was living her dream to be her own boss when life changed dramatically and almost prophetically in 2007.

The family had flown to the Philippines to attend her younger daughter Donna’s church wedding. The big event was to coincide with her 70th birthday, with the Lasola siblings reuniting for the first time since the funeral of their patriarch 42 years prior.

One week before the wedding, Lito, who had emphysema, suffered a fatal aneurysm. His bereaved widow gave consent to proceed with the wedding “because that was what he would have wanted.” The surviving parent of the bride poured her feelings in the speech she delivered at the reception. Her words were both a tribute to her husband and testament to her philosophy.

“As a psychotherapist, I strive to practice what I preach. And one of the concepts that I teach… is the 90-10 Principle,” she told 200 guests at the bittersweet gathering. “This principle states that 10% of what happens to us, we have no control over. But 90% is how we react or respond to what happens to us. We have control over that 90%; it is a choice we make. We can react negatively or we can respond positively. I chose to respond positively!”

Setting aside her grief, Paulita decided to dance at her daughter’s wedding to “celebrate the life and love of my husband.” For it was Lito who once advised her: “Ang patay, patay na; ang buhay, buhay pa: Life must go on. (The dead are dead; life is for the living: Life must go on).”

“He enjoyed watching me dance. I know he is here in spirit and I want him to watch me dance,” she said with conviction.

Two months later she was driving home from work when she noticed her fuel gauge light up. Rather than rushing home to have her son-in-law fill up as had been his chore since Lito’s death, Paulita headed to Costco and pumped gas for the first time after studying how others did it while waiting her turn.

Her inner light flashed at that moment.

“As I read the invoice, I realized that the act of pumping gas symbolized the end of my life as a pampered married woman and the beginning of my new life as a widow, a single woman,” she analyzed herself.

She had just turned 70, starting over, modeling life lessons from her personal and professional guidebook.

How to LEGALLY immigrate to USA (& pursue acting)

This video gives you some insight on how I did what I did. It by no means implies this is what you have to do. Remember – we all have our own story. It’s up […]

Referrence: Credit to Orchidsnlime Life in Canada – What You Should Know Before you set off on your big move to Canada, … source YouTube Related Posts:After U.S. Immigration Battle, Musician Kayhan…Movies on TV this […]