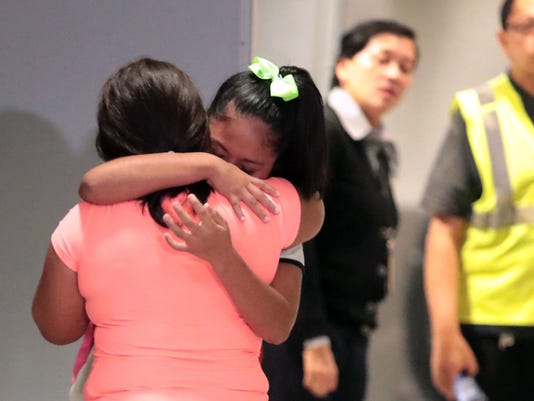 Yoselin Yamileth Velasquez Alemengor, 12, cries as she reunites with her mother, Perla Karlili Alemengor Miranda De Velasquez, at the Los Angeles International Airport on July 1, 2018. They were separated at the border in San Luis, Arizona, a month ago.(Photo: Richard Lui/The Desert Sun)

Federal immigration authorities were on track to reunify more than 1,600 eligible families by Thursday’s court-ordered deadline, drawing praise from a federal judge who has been highly critical of the family separations that occurred at the border under the Trump administration’s zero-tolerance border policy.

For the 1,637 families deemed eligible for reunification by the federal government, it appeared reunification will be completed on time, “which really has to be highlighted and the government has to be commended for its efforts,” U.S. District Court Judge Dana Sabraw in San Diego said during a status conference Tuesday with lawyers from the ACLU and the U.S. Department of Homeland Security.

As of Tuesday, 1,012 of the 1,637 families deemed eligible had been reunited, according to DHS lawyers.

But Sabraw also said the government needs to provide more information as quickly as possible about another 914 families currently deemed ineligible for reunification so that as many of them as possible can be reunified at some point in the future.

The 914 families currently deemed ineligible for reunification by the government include parents who have committed crimes, but also parents whom the government has been unable to locate as well as 463 parents who may have already been deported without their children.

Arizona Republic reporters explain the difference between seeking asylum at the border and attempting to immigrate illegally.
Carly Henry, The Republic | azcentral.com

The government identified a total of 2,551 children separated from parents at the border under the zero-tolerance policy, but only 1,637 of them have been deemed eligible for reunification.

“Some of this information is unpleasant,” Sabraw said. “It’s the reality of the case. It’s the reality of a policy that was in place that resulted in larger numbers of families being separated without forethought as to reunification and keeping track of people and that is the fallout we are seeing.”

Sabraw in June ordered the Trump administration to reunite nearly 3,000 children separated from parents at the border under the zero-tolerance policy aimed at cracking down on people who enter the country illegally, including parents accompanied by children, many of them asylum seekers fleeing poverty and violence in Central America.

RELATED: Woman seeks asylum by the book and it’s working

The administration missed the first deadline of reuniting the first group — children under the age of 5. The government reunited 57 of the 103 “tender age” children with their parents.

Here is everything you need to know about the Trump administration’s zero-tolerance immigration enforcement policy.
William Flannigan, azcentral

On Tuesday, Sabraw did not rule on a motion by American Civil Liberties Union lawyers asking that the government be blocked from deporting reunified families for at least seven days after Thursday’s deadline. He set the next status conference for Friday.

The federal government is arguing against the seven-day waiting period, and the two sides have been unable to reach a compromise.

ACLU attorney Lee Gelernt said the seven days was needed to give reunited parents time to discuss with their children and lawyers legal options for remaining in the U.S., including seeking asylum.

The ACLU believes the government plans to place between 700 and 900 reunited families in a detention center in Texas so that they can be quickly deported, Gelernt said.

“Things are absolutely a mess on the ground, and we absolutely need at least seven days for counseling these families,” he said.

“We have many reasons to be very proud of this effort, and so we strongly contest that characterization and look forward to present further views on that,” the lawyer said.

RELATED: Family separations could be an issue for voters

Immigration is a big topic leading into elections. Here’s what you need to know about the Trump administration’s policy and the family separations.
Carly Henry and William Flannigan, Arizona Republic

Spread the love Democratic U.S. vice presidential nominee Senator Kamala Harris responds to supporters as she arrives for a drive-in campaign rally in Fayetteville, North Carolina, U.S., November 1, 2020. [Reuters] The dynamism of the […]