The federal government is giving Toronto $15 million to help address mounting demand on the city’s shelter system as it faces the added pressures of refugee claimants. It’s the latest injection of funding since Ottawa committed $11 million last summer.

In a news release Friday, Immigration, Refugees and Citizenship Canada acknowledged that while affordable temporary housing has been a “key challenge in Toronto for some time,” the impacts of global migration have placed the system under greater strain over the past year.

The release went on to say that provincial governments are still “best placed” to distribute funding for housing pressures and wants to see a cost-sharing agreement with Ontario to help tackle the pressures on the system.

The comment appeared to strike right at the heart of a bitter exchange between federal Immigration Minister Ahmed Hussen and Ontario minister Lisa MacLeod in July, ending with Hussen calling the province’s take on asylum seekers “not Canadian.”

“Fix your border issues and pay Ontario the $200M you owe us,” MacLeod, the minister of Children, Community and Social Services, later retorted in a tweet. 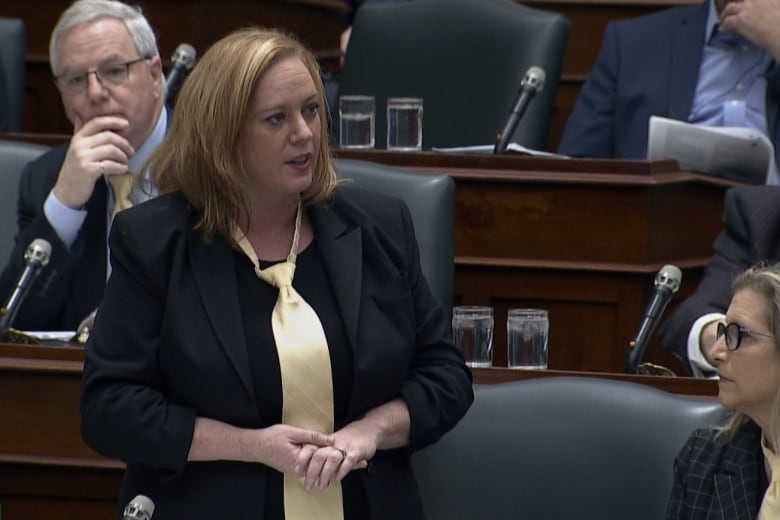 In a letter addressed to Bill Blair, the minister for border security and organized crime reduction, shared on Lisa MacLeod’s Twitter account, the provincial minister placed the blame for Toronto’s shelter pressures squarely on the federal government. (Ontario Parliament)

In a letter addressed to Bill Blair, the minister for border security and organized crime reduction, shared on MacLeod’s Twitter account, the provincial minister placed the blame for Toronto’s shelter pressures squarely on the federal government.

MacLeod also cited pressures on the city of Ottawa, saying the government’s “mismanagement of the illegal border crossers issue” has left the two cities in a “desperate position.”

In the same statement, Toronto Mayor John Tory thanked the government for the assistance “in response to the city’s request.

“We are working to help refugee claimants and asylum seekers who arrive in Toronto, but we have been clear that we cannot do this alone,” he added.

Declare a state of emergency, advocates have said

Tory himself has been in the crosshairs as homelessness advocates call on the city to declare a state of emergency with shelters overflowing.

The mayor has pointed to surveys showing about 50 per cent of homeless residents live with mental health or addiction issues, saying he’s seeking long-term solutions to supportive and affordable housing instead.

So far in 2019, four Toronto residents have died as a result of homelessness. Meanwhile, city staff have been clamping down on makeshift encampments such as the one under the Gardiner Expressway.

Street nurse Cathy Crowe recently told CBC News a record 1,002 people slept in an out-of-the-cold program instead of a shelter due to lack of space.

As part of calling a state of emergency, Crowe and other advocates have called for the opening of federal buildings. including the Moss Park armoury and city buildings such as Metro Hall.

Five years residency permit of Europe with spouse and children under 18 years, only though safe investment in real estate company or buy property of Euro … source YouTube Related Posts:Guidance relating to the UK’s […]

READ ME*** Hello everyone! Here is the highly requested video on how to VISIT / STUDY / WORK / MOVE to the US ^^ In the NEXT video I’m going to talk about … source […]