A former interpreter for a Nazi army unit has lost his appeal to retain his Canadian citizenship after the federal government stripped him of it, for a fourth time, in 2017.

Helmut Oberlander, 94, of Waterloo, Ont., was an interpreter for the Einsatzkommandos, which has been described as a group of killing squads that targeted Jewish people in the former Soviet Union during World War Two. Oberlander is not accused of taking part in any executions.

Oberlander has said he was forced into service and he never subscribed to Nazi ideology.

In July 2017, the federal government stripped Oberlander of his citizenship for the fourth time after three previous attempts, which Oberlander successfully appealed.

Without citizenship, his current status in Canada was not immediately clear. 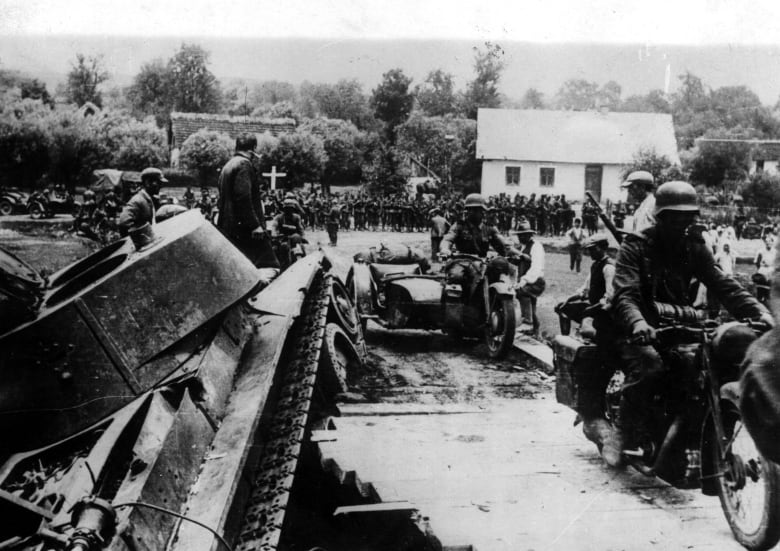 Nazi troops on manoeuvres in Ukraine, in August 1941. Oberlander was put into service at age 17 following Germany’s occupation. (Keystone/Getty Images)

Oberlander was born in Halbstadt, Ukraine in 1924, and was put into service by the Nazis when he was 17, during Germany’s occupation.

In 1952, Oberlander and his wife applied to immigrate to Canada and was interviewed by a security officer a year later.

“Had Oberlander answered the security officer’s questions truthfully by including his service as an interpreter with [the Einsatzkommandos], his application would have been rejected on security grounds,” the ruling said.

Instead, Oberlander’s immigration application was approved. He moved to Canada and became a permanent resident in 1954. He obtained Canadian citizenship on April 19, 1960.

Oberlander was interviewed by a German consular official in Toronto in 1970 and signed a statement about his wartime experience.

In 1995, the RCMP began an investigation into Oberlander’s involvement in Nazi war crimes. A few days later, the government started proceedings to strip him of his citizenship.

The new ruling notes during his time in Canada, Oberlander lived in the Waterloo region “and is reputed to have made a significant contribution to the local community.”

“Oberlander’s life since arriving in Canada has been beyond reproach,” it said. “He is in his 90s with significant health issues.”

Oberlander’s lawyer, Ron Poulton, could not immediately be reached for comment.

Minister of Immigration, Refugees and Citizenship Ahmed Hussen said the decision could still be appealed, but he thinks it was good news.

“We’re very happy with the decision, of course. It reaffirms our position that Canada should never be a safe haven for war criminals and people who have committed crimes against humanity,” Hussen told CBC News in Ottawa. “We’ll review the decision in more detail before we comment further.”

Michael Mostyn is the CEO of B’nai Birth Canada, which was an intervener in the case. Mostyn said the organization believes Oberlander should now leave Canada.

“There can never be a statute of limitations on matters as grave as this and Canada is being watched by the world right now on how we deal with those who were involved in very deep ways in the Holocaust,” Mostyn said.

The Centre for Israel and Jewish Affairs (CIJA) and the Canadian Jewish Holocaust Survivors and Descendants (CJHSD) issued a joint statement Thursday afternoon.

“For survivors, this issue remains an open wound,” Sidney Zoltak, immediate past president of the CJHSD, said in the statement. “It is painful to think that Oberlander and others who perpetrated heinous crimes against our families have, for so long, concealed their past and taken advantage of welcoming countries like Canada.”