The UK has been gripped by a sweltering heatwave, and it’s been causing absolute havoc to plants, farms and gardens across the country.

However, BBC Weather’s Carol Kirkwood has predicted that these soaring temperatures will drop significantly by the end of the week and that parts of the UK will get some much-needed rain.

“It is beautiful here in London this morning,” began Carol on BBC Breakfast this morning.

“The temperature’s just right. It’s not too hot, not too cold. We’ve got blue skies, and we are still crying out for rain.

“Well, there is some rain in the forecast this week,” announced Carol.

“Today’s forecast is a largely dry one for England and Wales, patchy rain in Scotland and Northern Ireland.

Carol then went on to predict that there will be some rain to the U.K. later on this week.

“But this week it is going to turn fresher, and there will be some rain at times,” she said.

“Some more significant rain is quite possible towards the end of this week towards the south-west even where we haven’t really seen any.

“Now what’s happening is we’ve got two weather fronts across us at the moment: the cold front – that’s the one with the blue triangles – is very slowly going to be moving south-east through the next couple of days, and as it does so that will introduce the fresher conditions,” Carol explained. 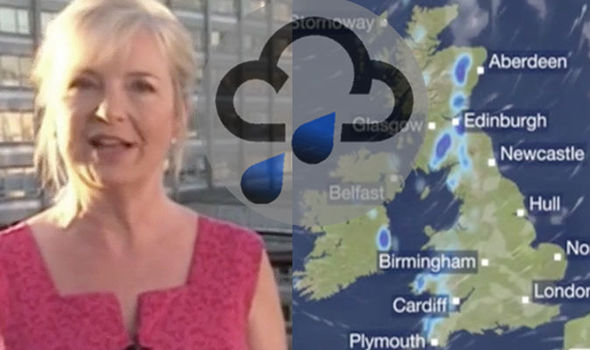 “But this morning we’ve got some patchy light rain and drizzle throughout parts of Scotland and Northern Ireland, that will move south towards Northern England throughout the day, and behind it, we’ll see a return to bright spells, sunshine and showers.

However, before the much-needed rain and cooler temperatures hit the UK, people are going to have endure more hot temperatures.

“Temperatures today, up to about 31 in the South East, generally from the high teens to the mid-twenties.

“Now, through this evening and tomorrow night, our weather front continues to sink south bringing cloud and some patchy light rain and drizzle across southern Scotland, north-west England, Wales and the South West. 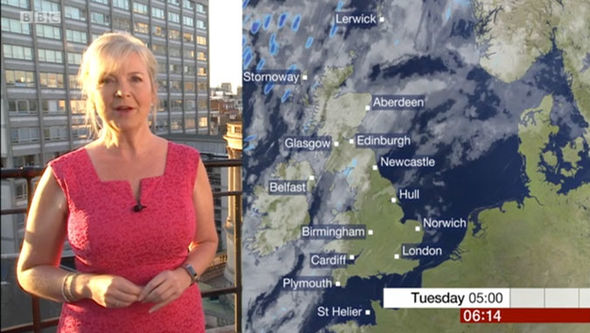 “There’ll also be some hill fog around. Temperatures fresher from the night just gone, but still about 18 degrees Celsius in London.

She added: “Behind it, sunshine and showers, ahead of it, still hot, still sunny. Tomorrow we could have highs of about 32 degrees Celsius.”

That’s when the heatwave will come to an abrupt end, and the cooler, more manageable temperatures will set in.

“But then, that’s it for the high temperatures for now because on Wednesday the weather front gets down and clears from the south-east leaving fresher conditions behind it.

“There’ll be a lot of dry weather, but a weather front coming in from the west is going to introduce some rain, and that’s going to be moving eastwards through the day, although probably not much of this will get into the south-east.

“And you see through the colours, the yellow’s pushed that red hot air well into the continent, and for the rest of the weekend it’s looking cooler,” explained Carol.

“In fact, by the time we get to late of Friday into Saturday, we do have quite a deep area of low pressure by the looks of it coming our way, and it’s that that’s likely to some more significant rain across the UK.

“Let’s hope that sticks because we’re crying out for rain and nothing happens in the meantime so that it spoils it all,” she finished.

BBC Breakfast airs weekdays at 6am on BBC One.

Understand the Immigration System in 8 Minutes

How many different ways are there to qualify to immigrate to the U.S., and how many immigrants live in the country? We explain the different types of immigrants, … source YouTube Related Posts:White House models […]

30 of the cosiest winter breaks in the UK

[ad_1] The latest lifestyle, fashion and travel trends Winter can be bleak. The days are short, the evenings are dark and the rain often lashes down. Which means there’s no better way to get through […]