Australia will have the eighth biggest economy in the world and a population of 36million by 2100, a major study has predicted.

Currently Australia has the 12th biggest economy but it will overtake Canada, Russia, Brazil and Italy in 80 years’ time, according to the University of Washington research.

The predicted population increase will be due to immigration because the nation’s birth rate is forecast to decline from 1.86 to 1.69 births per year per 1,000 people.

The study noted that immigration was key to economic growth and prosperity in countries where birth rates are declining.

‘Nations that sustain their working-age populations over the long-term through migration, such as Canada, Australia, and the USA, would fare well,’ the study read.

‘The optimal strategy for economic growth, fiscal stability, and geopolitical security is liberal immigration with effective assimilation into these societies.’

A team of 24 scientists led by Dr Christopher Murray and Professor Stein Vollset from the University of Washington in Seattle predicted the populations of 195 countries in 2100. The study was published in UK medical journal The Lancet. 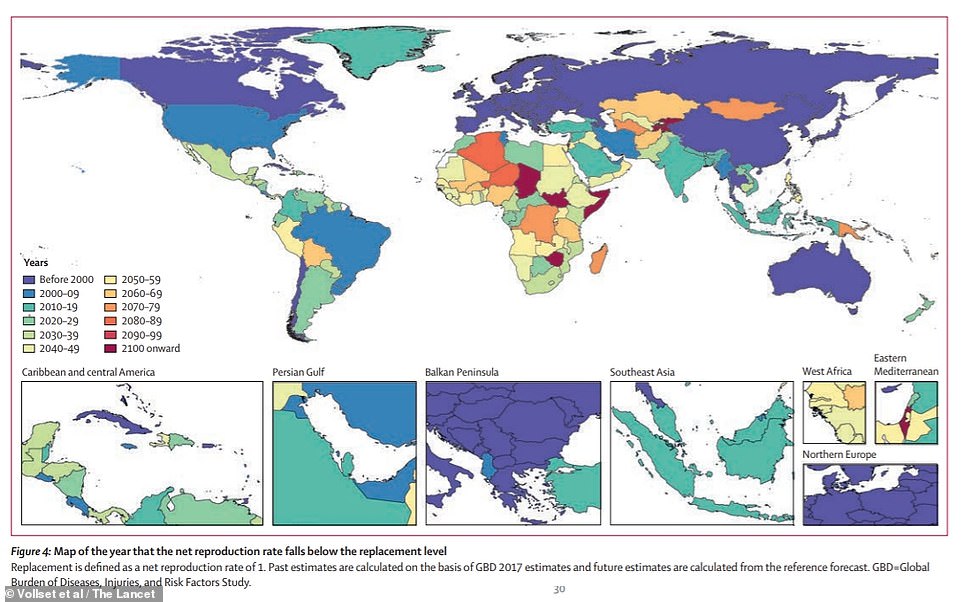 The US is among the countries (in purple, dark blue and dark green) that already have birth rates that are too low for the population to stay the same size or to grow, according to the study. Once the largest generations start to die off in those nations the populations will begin to shrink 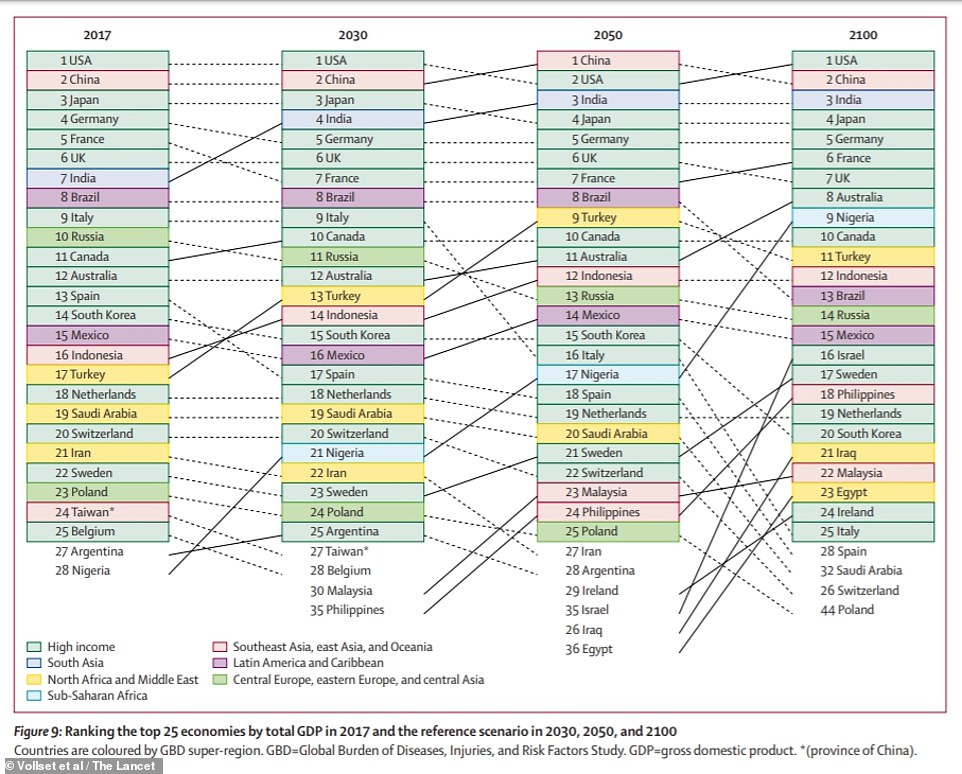 The economies of Indonesia, Turkey will make inroads to become two of the 12 most powerful nations by 2100 as Brazil and Russia slip down the global rankings

The study estimated that Earth’s population will peak in 44 years at around 9.7billion before it starts to shrink again.

After 2064 the total number of people will start to fall because of a decline in the number of children people are having, dropping by 900 million to 8.8 billion by 2100.

Populations will only grow or stay stable if women have an average of 2.1 children each – but better education and contraception will stop this in future because women will be more able to work instead of staying at home as mothers and wives, experts say.

WHICH WILL BE THE WORLD’S TOP ECONOMIES IN 2100?

The University of Washington study predicted many of the world’s top economies will remain powerful over the next 80 years but there will be some reshuffling in the ranks.

These are their predictions, based on gross domestic product (GDP):

Many countries already have lower birth rates than are necessary to sustain population sizes, including most of Europe, Russia, Canada and the US, Brazil, China and Australia. In the coming decades, older citizens in these countries will start to die at a faster rate than they are replaced and the populations will shrink.

Some countries, including Japan, Spain and Thailand will see their communities shrink by a staggering 50 per cent or more, the University of Washington researchers predicted.

As populations in the West shrink faster than they will in Africa and Asia — it will take another 80 years or more for birth rates to drop below sustaining levels in some slower-developing countries — a global power shift will emerge.

Nigeria is set to become one of the largest, wealthiest countries in the world by the end of this century, the team believe. The US will remain the top global power except for a period in around 30 years’ time when China will succeed it before dropping down again.

And the economies of Indonesia, Turkey will make inroads to become two of the 12 most powerful nations by 2100 as Brazil and Russia slip down the global rankings.

Lead researcher Dr Murray said: ‘Continued global population growth through the century is no longer the most likely trajectory for the world’s population.’

The scientists who did the study said birth rates are expected to fall globally as more and more countries become modernised and traditional roles of women as mothers and homemakers fade away.

Greater availability and affordability of contraception in countries that currently have poor healthcare will mean that unplanned children will become less common and not just a consequence of sex.

The fertility rate must be 2 for a population to remain stable and 2.1 for it to increase, the researchers said. To keep a community the same size a mother must, on average, not only replace herself but also the baby’s father. 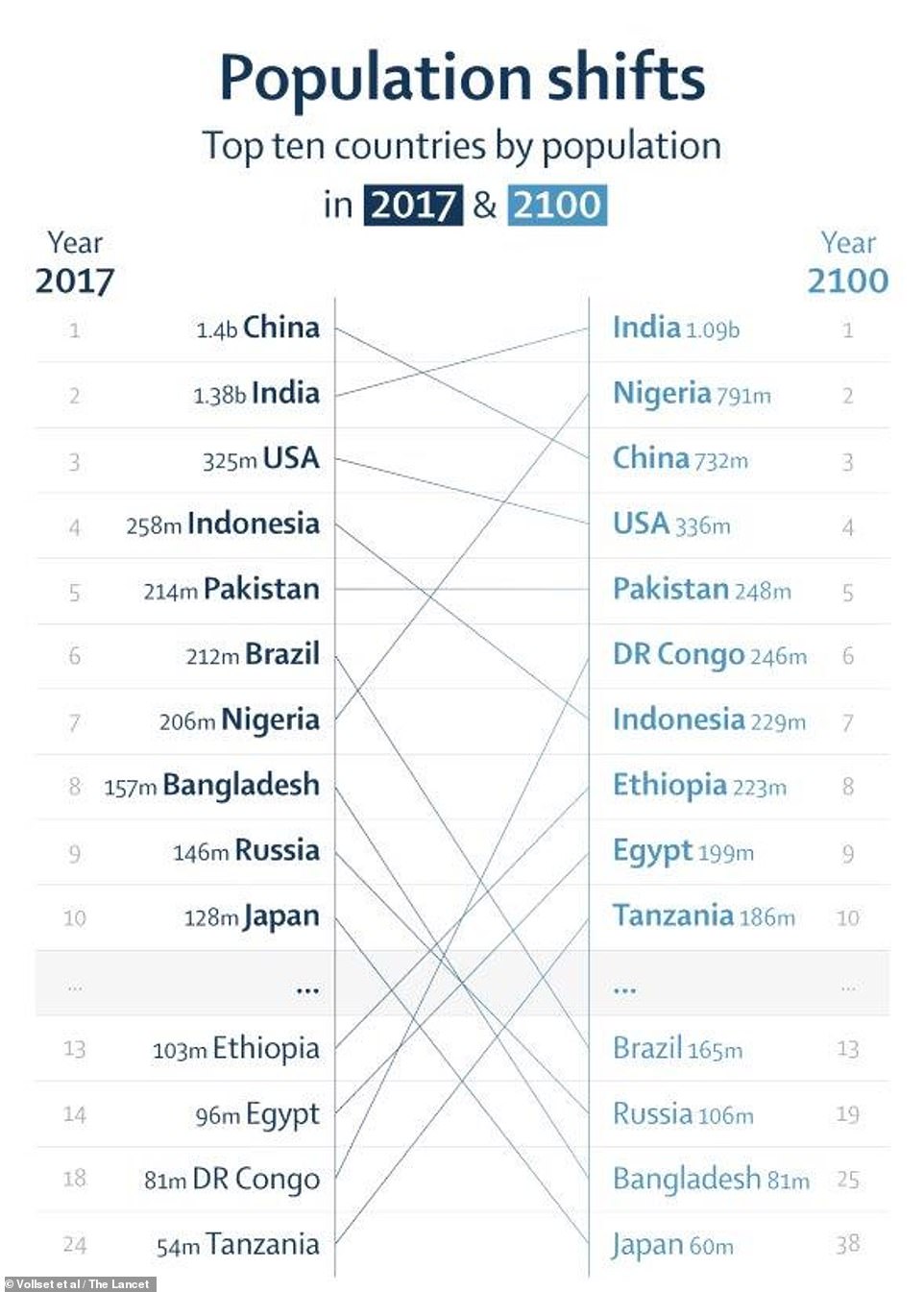 Nigeria is set to become one of the largest, wealthiest countries in the world by the end of this century, while India, China, USA, Pakistan and the Democratic Republic of the Congo will have the other largest populations

However, the scientists were adamant that fears about shrinking, ageing populations and the effects they might have on the economy must not lead to a slowdown in the march for women’s rights.

Professor Vollset said: ‘Responding to population decline is likely to become an overriding policy concern in many nations, but must not compromise efforts to enhance women’s reproductive health or progress on women’s rights.’

Dr Murray and colleagues said their work goes against the United Nations, which projects the population of the world will continue growing for the rest of the century.

But they acknowledge that the global population is likely to explode in the next 40 years, rising by more than two billion people. Much of this growth will be in sub-Saharan Africa, where birth rates are already high.

The Lancet study predicted the population of sub-Saharan Africa — which includes Nigeria, Democratic Republic of Congo and Kenya — will triple between now and 2100, from 1.03billion in 2017 to 3.07billion in 80 years’ time as health improvements bring the continent’s death rate down. 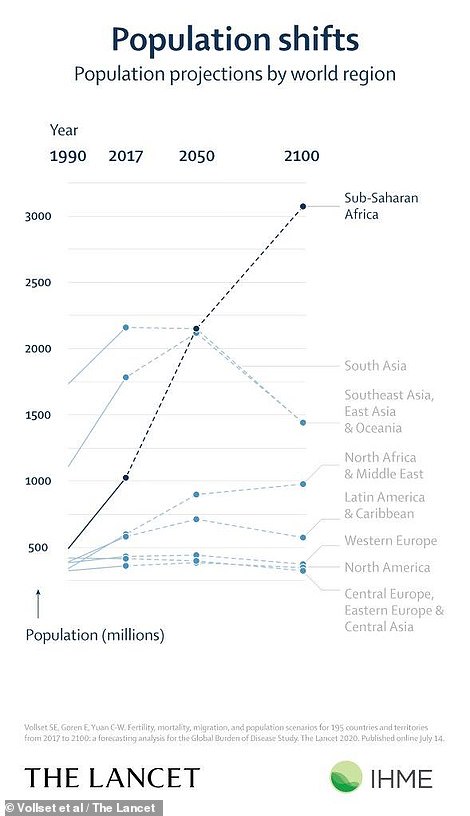 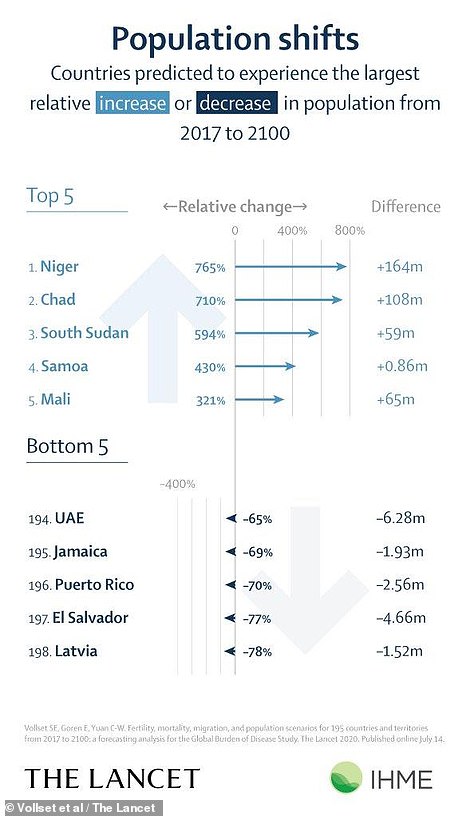 Sub-Saharan Africa and North Africa and the Middle East will be the only regions where the populations are higher in 2100 than they were in 2017, the study said (left). In sub-Saharan Africa the population is expected to triple in that time.  Niger and Chad (right), both in Africa, will see their populations soar in the next 80 years, increasing more than seven-fold, the scientists said

MIGRATION ‘WILL BE NECESSARY FOR ECONOMIES TO SURVIVE’

Many wealthy European and Asian countries will see their populations shrink dramatically over the next 80 years, the Lancet study claims.

And low birth rates and improved survival will mean their average ages increase, with over-80s expected to outnumber under-fives by two to one around the world by 2100.

One impact of this will be drastically reduced workforces in some countries such as Japan, Italy and Spain, which are forecast to see populations more than halve.

In a bid to boost the number of people working in a country and keep its economy healthy, migration and international co-operation may become a necessity.

Professor Ibrahim Abubakar, from University College London, was not involved in the University of Washington study but said in a commentary: ‘Ultimately, if Murray and colleagues’ predictions are even half accurate, migration will become a necessity for all nations and not an option…

‘The choice that we face is whether we improve health and wealth by allowing planned population movement or if we end up with an underclass of imported labour and unstable societies.

‘The Anthropocene has created many challenges such as climate change and greater global migration. The distribution of working-age populations will be crucial to whether humanity prospers or withers.’

He added: ‘Nations would need to cooperate at levels that have eluded us to date to strategically support and fund the development of excess skilled human capital in countries that are a source of migrants.

‘The projected changes in the sizes of national economies and the consequent change in military power might force these discussions.’

North Africa and the Middle East is the only other region that will have a bigger population in 2100 than it does now, the researchers said, with the number of people there rising from 600million to 978million.

In Japan the researchers estimated the population would fall from around 128million in 2017 to 60million in 2100 — a fall of 53 per cent.

A further 34 countries are expected to see their populations drop by between 25 and 50 per cent, including China, where the number of people is projected to fall from 1.4billion to 732million.

The researchers said that the average age of people will rise as a result of lower birth rates and better survival, meaning the working age population will shrink and economies would suffer.

Some of the oldest countries will have to rely on immigration to make sure they have enough people to keep industry going, the scientists warned.

Professor Vollset said: ‘The societal, economic, and geopolitical power implications of our predictions are substantial.

‘In particular, our findings suggest that the decline in the numbers of working-age adults alone will reduce GDP growth rates that could result in major shifts in global economic power by the century’s end.’

The researchers also projected a major increase in the number of elderly people. Over-80s will outnumber under-fives by two to one by the end of the century as fertility falls and life expectancy increases.

At the moment there are 681million children under the age of five — a figure that will fall to 401million.

The number of individuals older than 80, meanwhile, is projected to increase six fold, from 141million to 866million. Professor Vollset said this may have a major impact on the workforce.

‘While population decline is potentially good news for reducing carbon emissions and stress on food systems, with more old people and fewer young people, economic challenges will arise as societies struggle to grow with fewer workers and taxpayers.

‘Countries’ abilities to generate the wealth needed to fund social support and health care for the elderly [will be] reduced.’

Dr Richard Horton, editor-in-chief of the Lancet, added: ‘This important research charts a future we need to be planning for urgently.

‘This will truly be a new world, one we should be preparing for today.’ 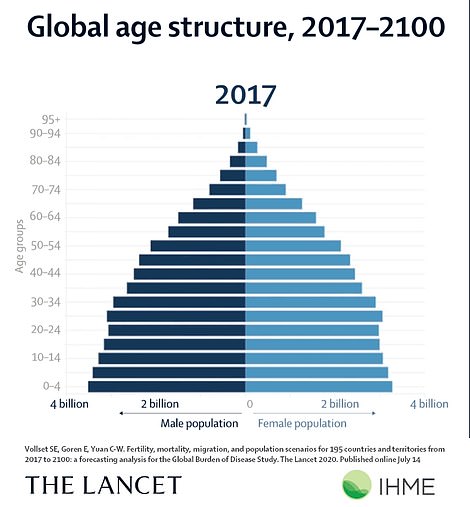 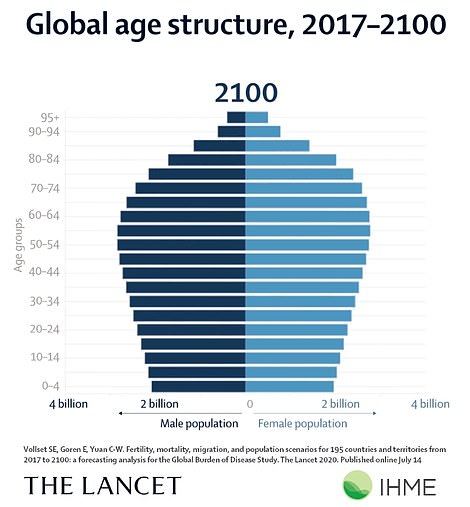 The researchers projected a major increase in the number of elderly people. Over-80s will outnumber under-fives by two to one by the end of the century as fertility falls and life expectancy increases. This could drastically reduce the number of people who are able to work in many countries, potentially damaging their economies

The fight to unite: International adoptions suffer under COVID-19 restrictions

Spread the love Finalizing an adoption is usually a time of celebration for families, as shown in this photo of National Adoption Day 2019 in Indiana. However, during the pandemic, finalizing international adoptions has been […]

Spread the love Bulgaria said Monday it may join other countries such as the United States, Hungary and Austria in rejecting a United Nations pact aimed at better regulating worldwide migration. The Global Compact for […]