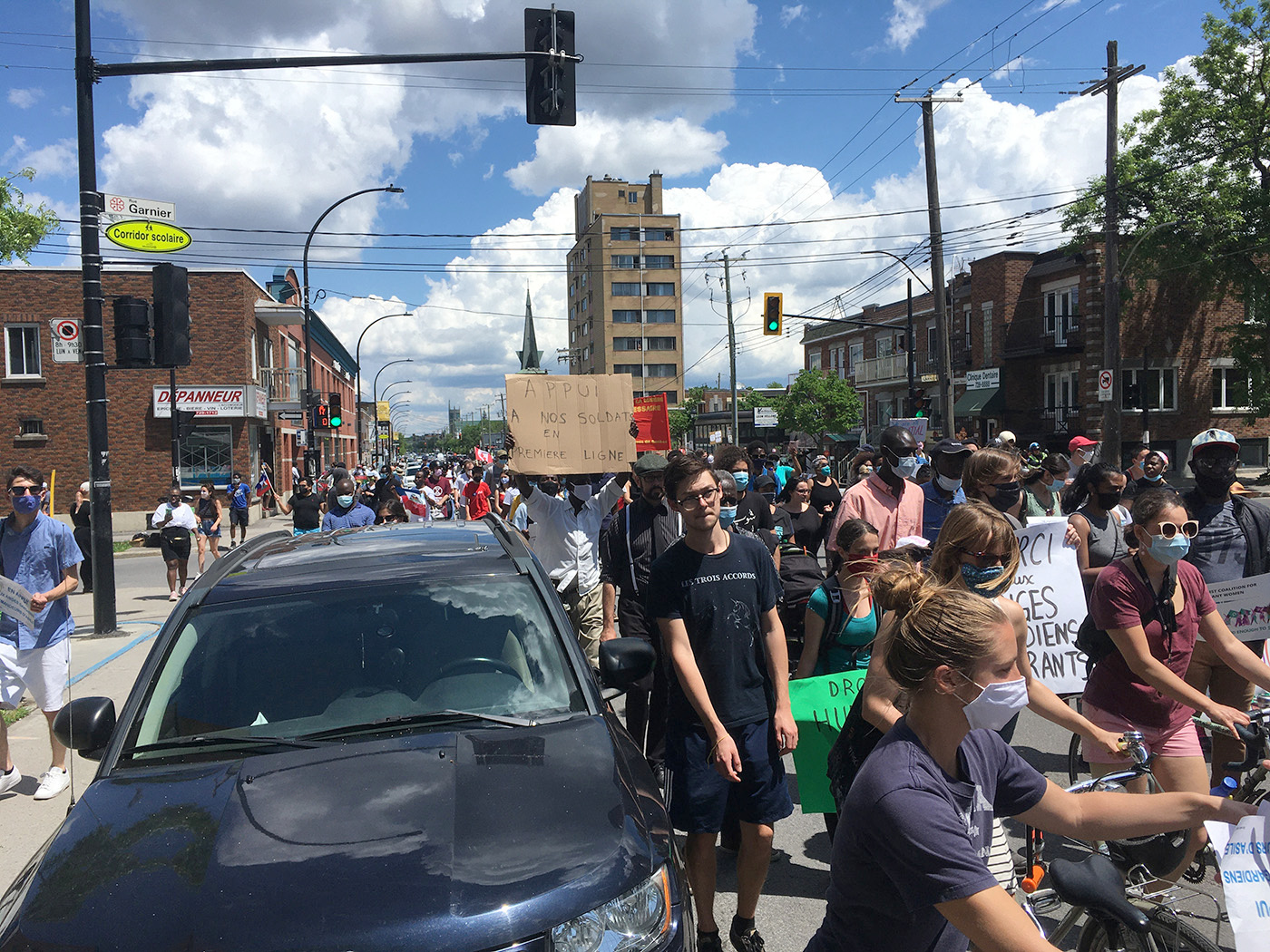 At a demonstration in June, participants called for the government to grant care home workers permanent residency. Photo: Emma Jacobs

In Canada, more than half the COVID-19 cases and two-thirds of deaths have been reported in Quebec. And around 80 percent of those who died lived in long-term care homes.

While these numbers have started to fall – Quebec had its first day without a coronavirus-related death since mid-March just this week – the pandemic has shone a spotlight on how many asylum seekers who arrived in recent years ended up working in these senior living facilities.

Magdala Jean-Pierre Michel, a nurse from Haiti who arrived in Quebec as an asylum-seeker via Roxham Road in 2017 has worked as an orderly and nurse’s aide in the province’s long-term care homes.

Orderlies, she says, who do the feeding, bathing and other resident care, play an essential role in these senior living facilities.

“They are the eyes of the nurses and nurses’ aides. I know that Madame so-and-so, it’s not usual for her to sleep all day, or to not eat. It’s not normal for her to not chat. So, the first person who’s going to see that is me and I’m the one who’s going to tell the nurses the change I’ve observed,” she explained.

Across the province, senior living facilities have been short-staffed for years, so many asylum seekers, who are allowed to work while the government reviews their claims, ended up in the field. According to one non-for-profit that works with newly-arrived asylum seekers, La Maison de Haiti, more than a thousand of its clients found work as orderlies since 2017.

Before the pandemic, this trend did not get much attention among the general public.

Premier Francois Legault, who was elected in 2018 on a platform of limiting immigration, had characterized asylum seekers as a burden, saying in 2017 that Quebec couldn’t accept “all the world’s misery.”

But in March, the coronavirus hit Quebec hard.

“It moved quickly. It was like a forest fire,” said Jean-Pierre Michel.

“Because it was new, everything needed to be put in place for personal protection, for disinfection, to see how to organize things so that it’s not transmitted to you or the patient,” she said.

In addition to more than 4,400 residents, at least five orderlies have also died in Quebec of COVID-19.

In his daily briefings on the crisis, Premier Legault began referring to care home workers as “guardian angels,” leading attorneys and advocates to point out that many still faced the possibility of deportation from Canada.

Three years on, Jean-Pierre Michel hasn’t received a decision on her asylum case. Some care workers have already been denied, and either remain in Canada while they pursue other legal options or under a temporary stay on deportations to their country of origin.

At a demonstration in June, participants called for the government to grant care home workers permanent residency.

“They’ve been like front liners with the pandemic,” said Eugenie Kadima, a nurse and nursing instructor who attended to support her colleagues in health care.

“They’re getting exposed every day and, as a nurse, I feel like the minimum that the government can do is actually give them their papers.”

Legault initially said that any special treatment for this group of asylum seekers would send the wrong message.

“We cannot open the door to say: ‘if you come illegally, if you find a job, that’s ok, I will accept you as an immigrant,’” Legault said in late May.

But soon afterwards, his government softened its tone, saying it would look at individual asylum seekers case by case to see if they could qualify as economic immigrants. Radio-Canada later reported the federal government is preparing to go further, with a temporary program that would offer health care workers permanent residency.

Immigration, Refugees and Citizenship Canada has not released a formal announcement or timeline for this program and did respond to a request for more information.

Jean-Pierre Michel evoked a Haitian expression in reaction to the shifts in government policy.

“‘What’s not right for you, could be right for me,’ which is to say, it’s a tragedy, the pandemic. But the pandemic is also allowing movement on a lot of things, particularly, here in Quebec, on immigration,” she said.

Jean-Pierre Michel said she was dismayed to learn that a separate government program will not be open to asylum seekers.

Quebec began training 10,000 new orderlies this summer, who will start jobs at twice the salary she made when she started working in care homes through a temp agency. She had spoken to others in similar circumstances to her own who had hoped to pursue the training program when it was first announced.

While Jean-Pierre Michel says she never imagined leaving Haiti before coming into conflict with a former government official there, she has found purpose in her new role.

“I love my country a lot. I love my community. I’m someone who is very involved in my community and never thought I would leave,” she says, but, “As fate would have it, I am here, helping in the care homes. I am saving lives and so I will continue doing it.”

Spread the love MONTREAL, Quebec, June 24, 2020 /PRNewswire/ — Immigration.ca has expanded its turnkey business advisory services to assist International Entrepreneurs seeking admission to Canada under the Start-Up Visa. Through its new offices in […]

Spread the love कनाडा PR के लिए आवेदन करने का सर्वोत्तम तरीका I hope This Video Will Helpful For You ,,,,,,,,,If You Want More Videos… source YouTube Related Posts:UK election: Dossiers of dirt are being […]