The Hong Kong Police Force is one of the world’s oldest. For nearly 175 years, its officers have been at the front lines of the changing city. This is where they stand in times of protest, such as in 1967 when the city was rocked by pro-communist riots.

They are the first point of contact during humanitarian crises, handling the tens of thousands of mainland Chinese refugees whose settlement was destroyed by fire in 1953, and taking charge of security for the emergency housing of some 200,000 Vietnamese refugees who landed in the port in the mid-1970s.

In recent years, the police force has been increasingly caught in a societal divide stemming from political tensions, which boiled over in the 2014 Occupy movement. In the aftermath of clashes between protesters and police, seven officers received two-year jail terms for beating an activist, while a retired policeman received a three-month jail sentence for striking a bystander with a baton. 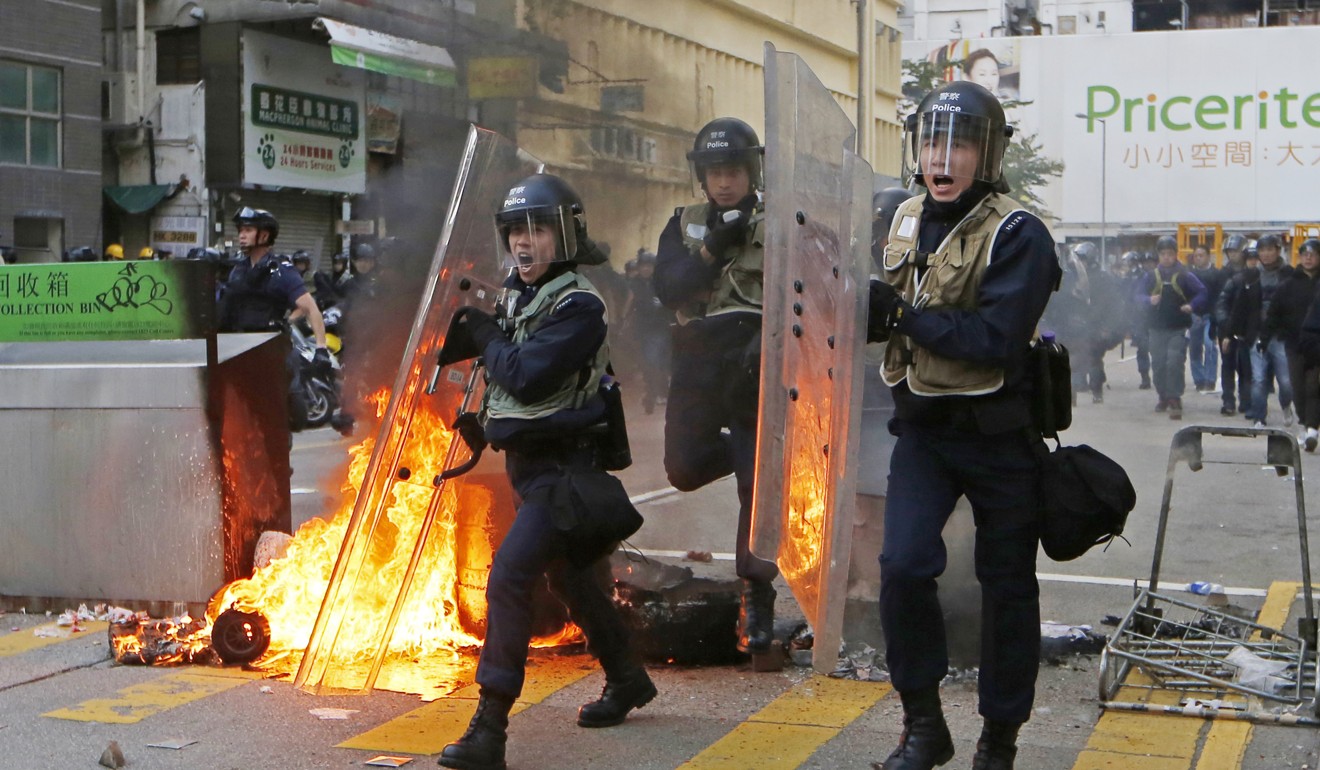 That verdict prompted police chief Stephen Lo Wai-chung to counter an outcry within the force with a call for unity and “professionalism”. The fallout from these events continues to reverberate, as the seven officers in the earlier case begin their appeal against the sentence.

While today’s police look to maintain their image with a carefully curated social media presence, they are also often the subject of public critique.

Last month, two on-duty officers caught napping in their cruiser and another wearing his police cap backwards while on patrol, sparked long threads of public commentary online, with most condemning their behaviour, forcing top brass to address the matter.

Yet Hong Kong now ranks as one of the world’s safest cities, coming in at No 9 worldwide in the Economist Intelligence Unit’s 2017 Safe Cities Index. 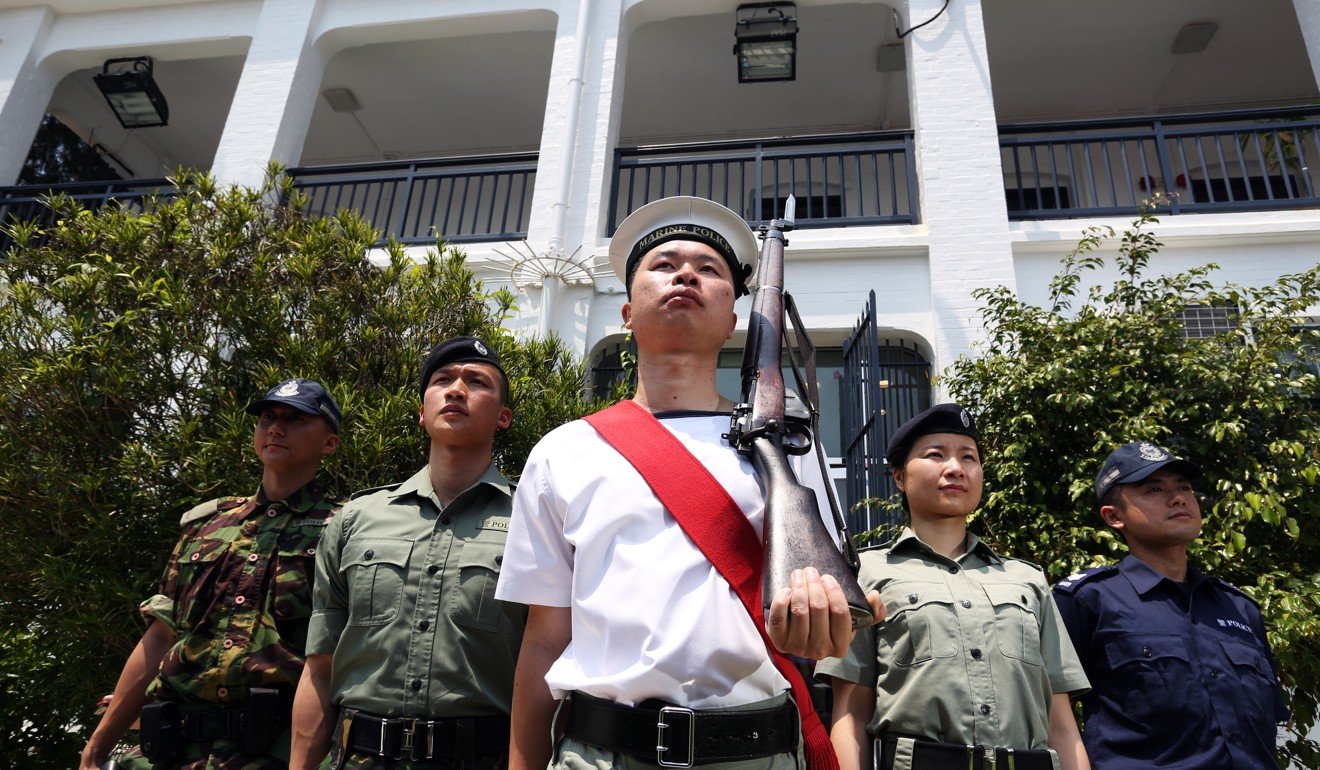 How has the force changed over the years?

Today around 29,000 officers patrol Hong Kong. They are all hired locally and required to speak both Cantonese and English. Before the city’s handover from British to Chinese rule, officers came from throughout the British Empire to serve alongside locals and mainlanders, with the highest ranks largely filled by foreign personnel.

The first force in 1844 was made up of mainly European, Chinese, and Indian servicemen. In the 1860s, about two-thirds of officers were Indian, brought over from Mumbai to clean up crime on Hong Kong’s streets and seas, which were crawling with everything from pickpockets to organised gangs and pirates.

Female officers have been part of the force since 1949, when Hui Kam-to, also known as Kimmy Koh, a Hong Kong resident of Malaysian-Chinese background, became a city detective.

By the end of this year, there will be fewer than 100 overseas officers, relics of the overseas recruitment that ended in 1994. More recent recruits have included officers from Pakistan, India, Nepal and the Philippines, who passed language tests and were hired on local contract terms.

About 16 per cent of the current force is female.

Asleep at the wheel: officers caught napping outside city school

What do the special teams and forces do?

A range of cases – from terrorism, cyberattacks and illegal immigration to drug deals and human trafficking – all fall under the purview of the Hong Kong Police.

To counter this swathe of crimes, the force is divided into five principal departments. There are also specialised units such as the Explosive Ordnance Disposal Bureau and the Cyber Security and Technology Crime Bureau. The Marine Police covers law enforcement on water.

Perhaps the most iconic of the special teams is the secretive “Flying Tigers squad” or the Special Duties Unit. Bound by strict confidentiality agreements, this elite force deals with terrorism, hostage situations and other serious crimes.

The team has run over 160 missions and 335 underwater searches in more than four decades of action, including gun busts and shoot-outs with stun grenades and tear gas. They now work with a dedicated police Counter Terrorism Response Unit, established in 2012. 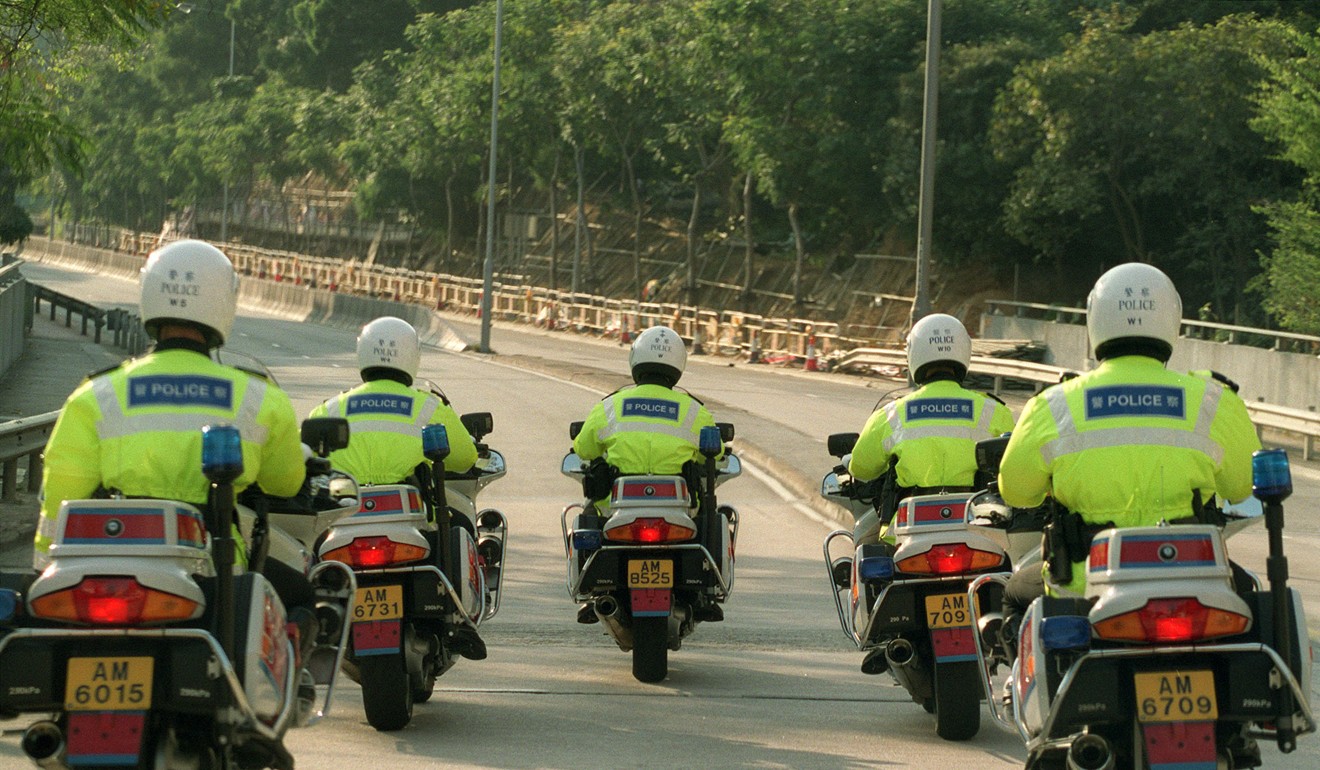 What are the different ranks of officers?

The force has a strict hierarchy, yet senior officers are allowed and even encouraged to move between departments over the course of their careers, according to retired officer Henry Ho. The police commissioner sits at the top; one deputy commissioner oversees operations and the other leads management, which includes personnel training and police communications, such as navigational and radar systems.

Within four departments which are run by directors, the assistant commissioner of police ranks highest, with 10 levels between this post and the lowest rank – constable – who is a beat patrol officer. The fifth department, the Planning and Development Branch, is commanded by the chief superintendent of police and has a civilian director.

A variety of badges and designations shown on uniforms indicate rankings, with constables only displaying their number.

How have the uniforms changed over the years?

The earliest police uniforms reflected the international backgrounds of the force. Sikh officers wore turbans, local officers wore conical bamboo hats, and colonial officers were often seen in their typical pointed helmets. There were even letters on collar badges indicating backgrounds, with ‘A’ for Europeans, ‘B’ for Indians, ‘C’ for Cantonese, and ‘D’ for the large group of officers recruited from Shandong province on the mainland, according to a historical account by journalist Kevin Sinclair.

For much of the 20th century until 1979, the force had a memorable summer look – khaki green uniforms with Bermuda shorts and high socks, while women sported khaki skirts and blouses. The current uniform includes light blue shirts with dark blue cargo trousers, black caps and ties for both sexes, with senior officers in white shirts. Officers on patrol will typically carry a service revolver. 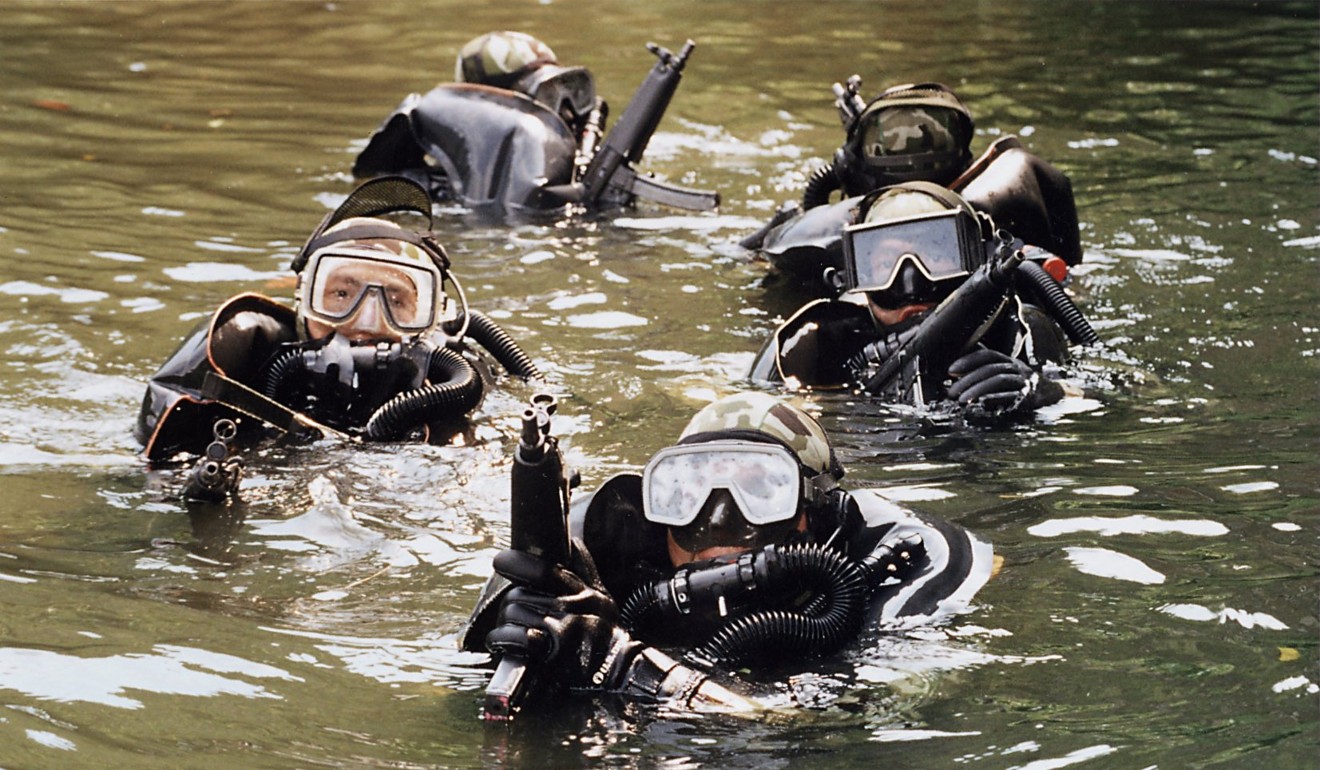 How have rising political and social tensions in Hong Kong affected police?

The city’s officers are increasingly pulled into its political narrative in recent years, caught between the divide in society over Beijing’s rule. Pro-democracy and localist advocates claim Hong Kong’s freedoms are being encroached on, and this has led to conflicts in the form of protests and rallies, in which police are deployed for crowd control.

Violence between protesters and police escalated in 2016 during the Mong Kok riot over regulations on illegal street food hawkers just before Lunar New Year, with bricks and glass bottles hurled at officers. The chaos led to a policeman firing warning shots in the air after a colleague was knocked down.

In 2014’s Occupy protests, co-organiser Benny Tai Yiu-ting called on police not to regard civil disobedience activists as troublemakers, promising in return they would not regard frontline officers as enemies. But tensions boiled over as the 79-day movement wore on.

In the years post-Occupy, both protesters and police came under the long arm of the law. Seven officers were jailed for assaulting a pro-democracy activist, and a retired officer was also thrown behind bars for hitting a bystander with a baton. The convictions further strained tensions in society. 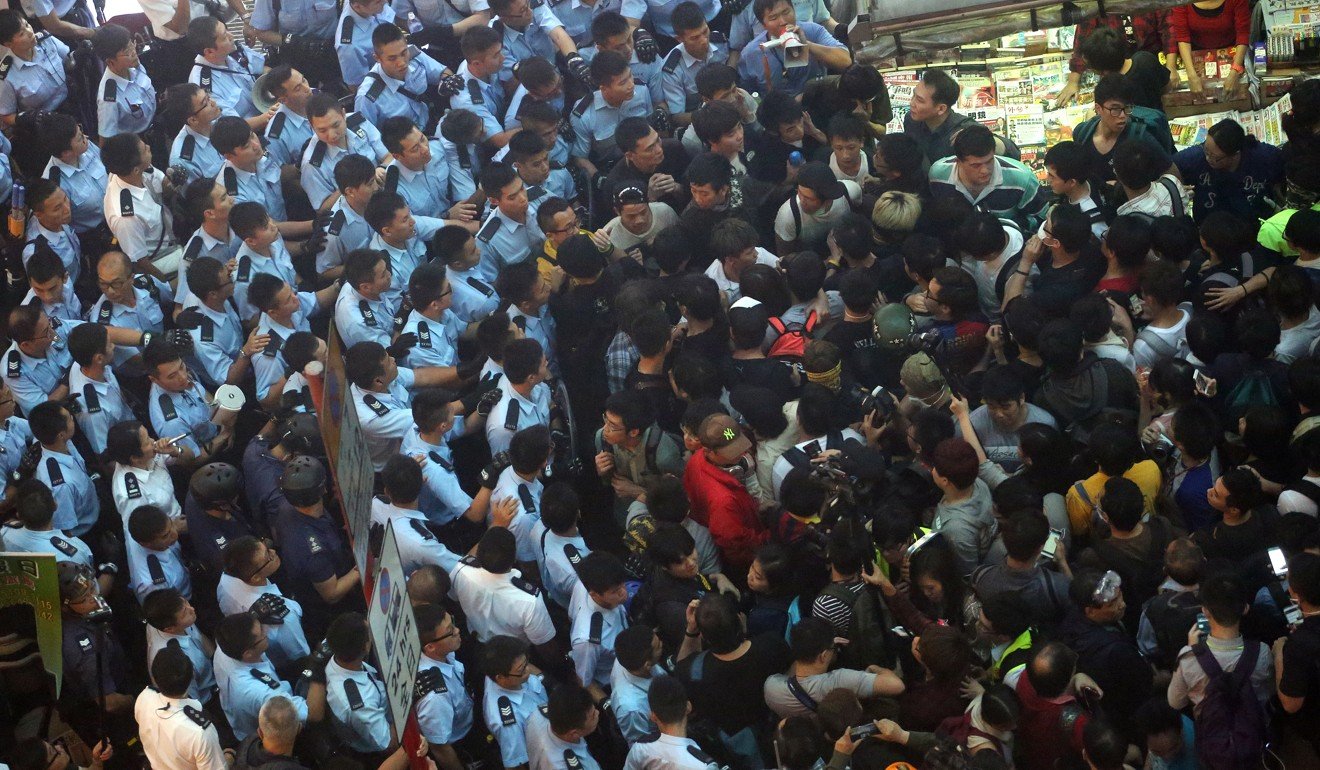 “In the last decade, particularly after 2014, there have been a lot of accusations and arguments towards the police, and a lot of [officers] feel unhappy from the people’s challenges, because they think they are really professional and they [act] in accordance with the law,” says Lawrence Ho Ka-ki, criminal justice specialist and assistant professor of social sciences at the Education University of Hong Kong.

Ho said some members of the public “are not fully convinced by the performance of the government and police”, especially when the force as a disciplined service is equated with the administration.

According to him, there is an “expectation gap” between citizens’ concepts of how police should act and the force, which Ho says has remained largely the same in its organisation and aims since late British rule, with little modern reform over the past 20 years.

Immigrate to Canada without paying Consultant or Agent

This video describes how you can Immigrate to Canada without using Any Agent. Further what you should do if you dont have sufficient CRS point score is … source YouTube Related Posts:Doctors, nurses, porters, volunteers: […]

Immigration arrests at US-Mexico border decline for a second month